Rommel 3yo Catch These Hands rocketed home for an outstanding victory in the Amelia Park Maiden (1400m) at Ascot on Wednesday.

Short-priced favourite Missile Storm (Smart Missile) looked all over a winner at the furlong but Catch These Hands made up six lengths to reel him in and go clear by a half-length.  Trained by Steve Wolfe, he had put the writing on the wall with a flying second to Starry Heights (Star Turn) at Northam a fortnight ago.

“He’s racing well but still has a lot to learn,” Natasha Faithfull said after weighing in.  “He’s green and never touched the bridle today.  I thought he would run a place at best when we straightened but he got on the right leg and really let down.

“That will give him a lot of confidence.  I thought he wanted a mile today but Wolfie kept him at 1400m.  He was right and it all worked out in the end.” 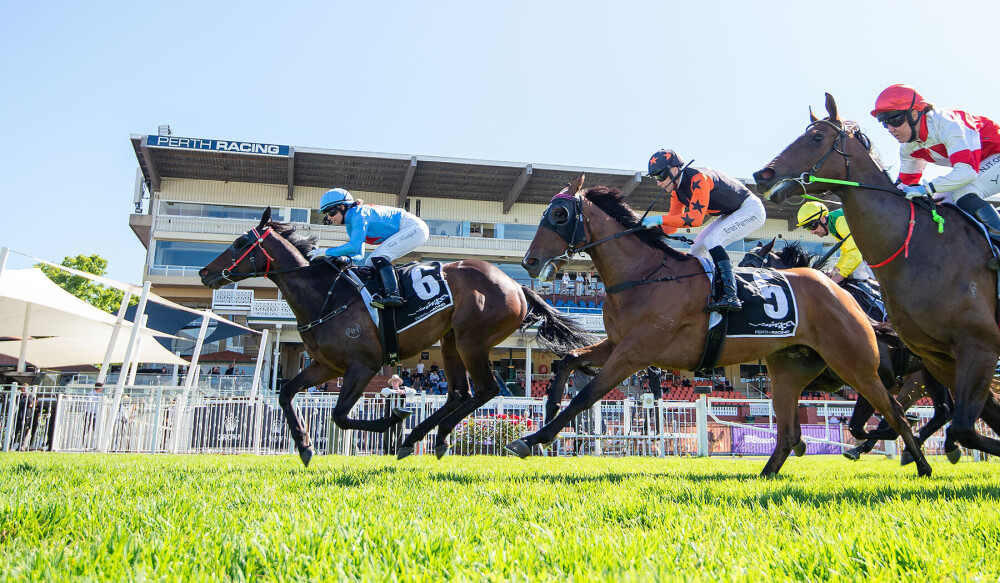 Catch These Hands (Photo / Western Racepix) was bred by Santo Guagliardo and sold for $60,000 through the Mogumber Park draft at the 2021 Perth Magic Millions.  His older full-brother Pale Rider won at Ascot and Belmont last season for Ted Martinovich before transferring to Hong Kong in August.

Pale Rider has been renamed Tourbillon Prince.  He’s with Caspar Fownes and, after acclimatizing at Sha Tin, was sent to Conghua last Thursday.

Their dam Colleges (Elusive Quality) has been a regular cover for Rommel.  She has a yearling filly by him and filly foal that arrived in September.

Second-dam High School (Sadler’s Wells) is a full-sister to In The Wings who was a Group 1 winner in France (Grand Prix de Saint-Cloud), USA (Breeders’ Cup Turf) and England (Coronation Cup).

Rommel (Commands) stands at Mogumber Park for a $7,700 (inc GST) fee and Catch These Hands is his fourth maiden winner in the last fortnight.  His divisional leader Snowdome won the Perth 3YO Classic (1000m) first-up this season but was a well-beaten fourth in the LR Fairetha Stakes (1400m) at Ascot on Saturday.

Snowdome did have excuses after missing the start and trainer Neville Parnham will press on with a G2 WA Guineas (1600m) campaign in a bid to repeat Rommel’s victory in the classic of 2014.

Fellow Mogumber Park sire Safeguard is going just as well, if not better, than his barn-mate.  He climbed to 7th on the WA sires’ premiership this week with recent winners Disco Donut, Cosmopolitan Girl, Surveillance and there’s a promising 2yo in the pipeline named Soaring Solo.

Soaring Solo put three lengths on her rivals in the space of 400m at the Belmont trials on Monday.  The Colin Webster-trained filly was also bred by Guagliardo and was purchased at the 2021 Inglis September Digital Sale by Rob Bransby.  She’s the first foal of unraced I Am Invincible mare Sound Of Thunder.

Safeguard (Exceed And Excel) stands at Mogumber Park for a $4,400 (inc GST) fee and he has front-running 3yo Just Go ready to give another good sight in the $500,000 LR Placid Ark Stakes (1200m) at Ascot this Saturday.