Vinery stallion Star Turn picked a good day to sire a running double on the Group 1 Railway Stakes program in Perth and his Saturday haul also included All About Eve who went back-to-back at the Ballarat Cup meeting.

Short-course specialist Beads had just enough in reserve to win Star Turn’s first-leg at Ascot for trainer Steve Wolfe and stable jockey Shaun McGruddy.  Racing first-up after a busy 3yo campaign last season, he held off Pixie Chix (Rommel) for a fourth city win that sent his bank-balance past $255,000. 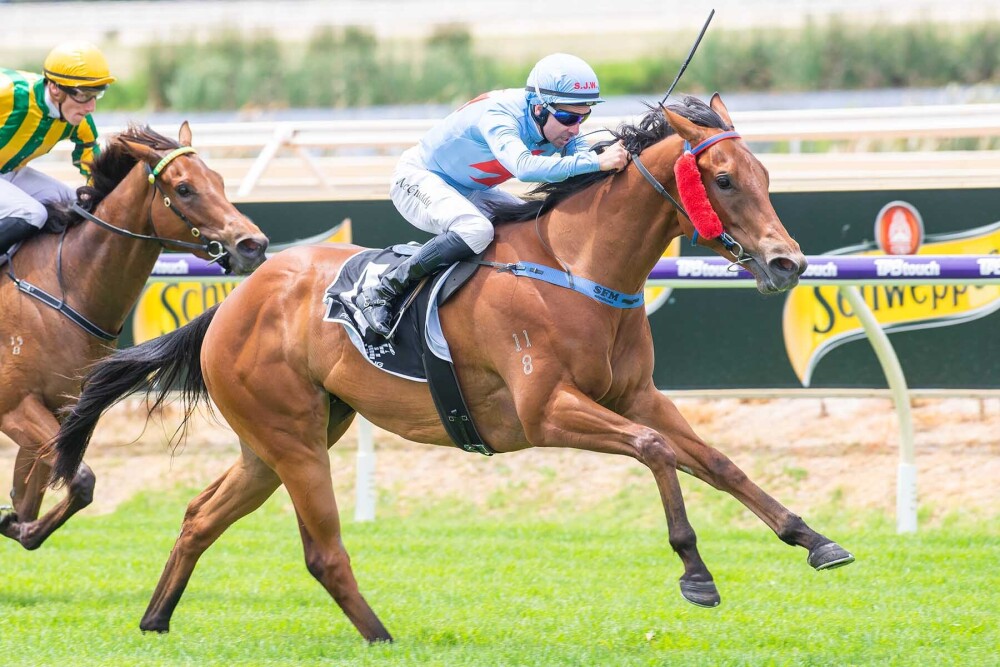 “He didn’t trial and was underdone but it was a beautiful ride by ‘Shooter’ today,” Wolfe said after the Drummond Golf Hcp (1000m).  “He’s so genuine and it’s great to win a race on a day like this.  He still a bit round.

“Working them on the beach helps but there hasn’t been a lot of sun down at Albany. I think he will get further but the jockey doesn’t think so!”

Wolfe purchased Beads (Photo / Western Racepix) privately from Tony and Di Marwick who operate Secret View Thoroughbreds in the Great Southern at Elleker.  They had purchased him as a foal from Torryburn Stud for $62,500 at the 2019 Magic Millions National Sale.

His dam Sopraffina (Exceed And Excel) followed up with Get In The Spirit (Spirit Of Boom) who won last year’s VRC Maribyrnong Trial Stakes (LR, 1000m) at Flemington for trainers Mick Price & Michael Kent (Jnr).

Star Turn’s ultra-consistent mare Alsephina made it six wins in eight starts in the Amelia Park Hcp (1400m).  Starting a short-priced favourite under Willie Pike, she was flushed out five-wide on the home-turn and maintained that momentum to the roar of the Wizard’s home-town crowd.

“She’s a lovely mare and we’ve taken our time,” co-trainer Grant Williams said.  “She’s really blossoming now and that was a tough win first-up with 59kg over 1400m.   It’s great to have Willie back, too.  Our families are close and we’ve just spent a weekend together with the kids down at our farm.”

Alsephina was bred by G&G Bloodstock’s Michael & Carolyn Grant from Delta Gee (Street Cry) who won the LR Natasha Stakes at Ascot in 2009.  They race her in a syndicate that includes Williams and his wife Alana, Neil Pinner, Tony Buhagiar, Chris Chalwell and Tim McLernon.

Conditions were much gloomier at Ballarat and that suited All About Eve perfectly when she ploughed through the slow conditions to win the A Grade Sheds Hcp (1100m).  She was coming off a first-up victory at her home track last month.

All About Eve also has a WA connections through Forest View owners Ben and Jo Duncan who bred and sold her for $110,000 at the 2020 Inglis Melbourne Premier Sale in partnership with Rushton Park’s David and Kayley Johnston.

“She’s been going really well at home and that was a good win from so far back in that ground,” trainer Andrew Noblet said.  “We gave her a long winter break up at Rushton Park and she returned in great order.  She’s good enough to win a black-type race but first we will see how she comes through this.”