Winner of the Week – Alaskalot 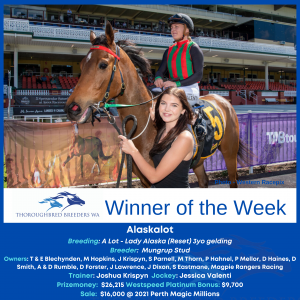 Alaskalot has the pedigree and the potential to make the grade on the strength of his first win in Schweppes Maiden (1400m) at Ascot on Wednesday.

The 3yo son of A Lot (USA) was usurped as favourite but defied the drift to sit three-wide without cover and still find enough in a driving three-way finish.  He was coming off a flashing-light debut when runner-up to Kosta’s Crown at Ascot last month.

“That was fantastic.  He’s inexperienced and doing it on raw ability,” part-owner and trainer Joshua Krispyn said.  “Jess (Valenti) rode him to instructions and that last furlong was very pleasing.

“He’s pretty casual and doesn’t work himself up.  He’s lightly-framed and will go for a spell now for the autumn.  We’ve had plenty of offers but he’s not for sale.  The plan is to bring him back for the (G2) WA Derby (2400m).

Mungrup Stud bred Alaskalot and his older half-brother Alaskan God (Playing God) who won this year’s WA Derby.  He’s the $4 pre-post favourite for the G1 Railway Stakes (1600m) this Saturday, November 19.  Their dam Lady Alaska (Reset) has a 2yo colt and a yearling filly by Playing God.  The colt was an $80,000 buy for Santo Guagliardo at the 2022 Perth Magic Millions.

Alaskalot is a first-crop son of A Lot (USA) who stands for a $5,500 fee (inc GST) at Willaview Park in Narrikup.  A Lot is a Stakes-winning son of Tapit who completed a hat-trick of North American sires’ premierships in 2016.