Winner of the Week – Bonjoy 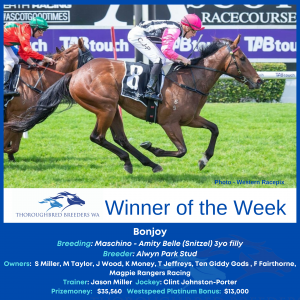 Maschino filly Bonjoy is destined for better things after sustaining a 600m last-to-first sprint in the Glenroy Chaff Maiden (1400m) at Ascot on Thursday.

Guided by Clint Johnston-Porter, Bonjoy won eased down from Juruena Gold (Star Witness) and Santa Brae (Manhattan Rain).  She had opened her career with close seconds at Northam and Ascot last month and overcame a wide draw to score third time out.

“She’s a lovely filly and has been faultless,” trainer Jason Miller said.  “She’s still learning but has already come a long way this prep.  I was happy enough to see her back there with cover from that barrier and even happier to see her right behind the favourite.”

Bonjoy was bred and sold by Alwyn Park for $60,000 at the 2021 Perth Magic Millions.  Maschino’s latest new winner has the potential to rise to black-type ranks where her sire is flying at a 22% strike-rate.  He’s based at the Serpentine nursery for a $9,900 (inc GST) service fee.

“She’s been knocking on the door and I was lucky enough to take over today,” Johnston-Porter said.  “It was pretty straightforward.  I tracked up from the back in the flowing line and she accelerated once we got to the outside.”

Bonjoy descends from a family brought to WA by Sir Ernest Lee-Steere in 1992.  The Limestone Park owner was enjoying a Group 1 reincarnation that season with Heroicity in the WATC Australian Derby and STC BMW.

Limestone Park reinvested at the 1992 majors and one of those yearlings was a Don’t Say Halo – So Elated (Vain) filly that was a full-sister to Melbourne Group 2 winner Excited Angel.

Named Prayerful, she won the 1993 LR Burgess Queen Stakes and was runner-up to Island Morn (Marooned) in that year’s edition of the LR Belgravia Stakes.