Legacy Of Tara kicked off a rapid-fire treble for her sire Awesome Rock in the Seppelt Wines Hcp (1400m) at Ascot on Tuesday.

Awesome Rock (Fastnet Rock) stands at Gold Front Racing & Breeding so it was appropriate his opening winner is a Gold Front homebred for Alan and Sue Olive.  Awesome John followed suit at Kembla Grange as did Corn Cob back in the west at Geraldton. 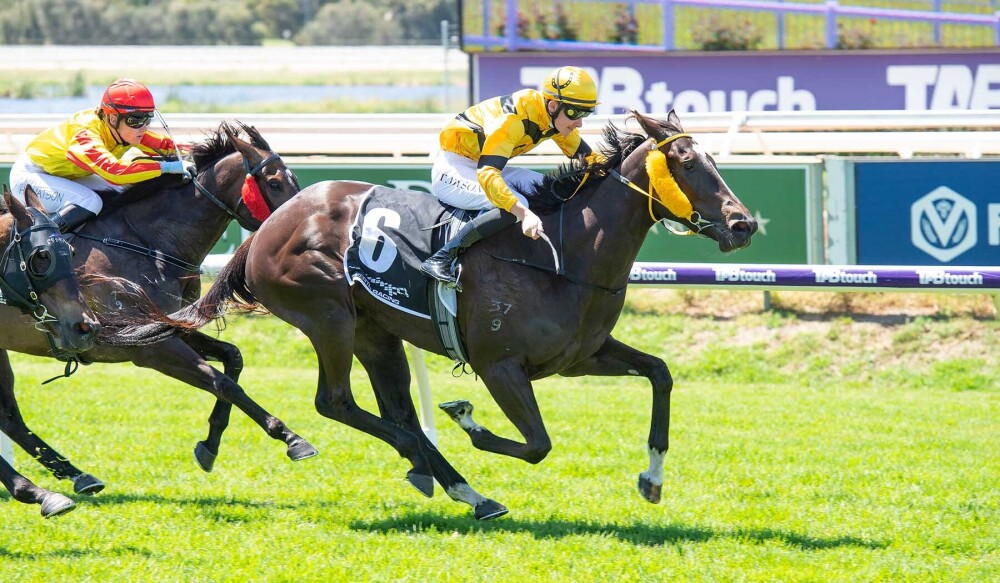 Legacy Of Tara (Photo / Western Racepix) was bred by Alan and trained by Sue although they were in Townville when she landed the Seppelt Wines Hcp (1400m).  Apprentice Taj Dyson let her face the breeze outside Aiyza (Al Maher) but the leader was there under sufferance when Dyson applied the acid test in the straight.

A 3yo debut winner at Pinjarra in August, Legacy Of Tara doubled up at Northam before suffering her first defeat at Belmont in September.  “She’s had some issues that day so we gave her a three-week let-up and added winkers today,” assistant-trainer Mat Herbert said.  “It’s still her first prep and she isn’t quite there mentally but she’s tough and wants to be first at everything back home.”

The Olives purchased her dam Tara Beauty (Sebring) for $80,000 from Segenhoe Stud at the 2014 Magic Millions National Sale.  It’s a pedigree brimming with black-type – there are nine Stakes winners under her USA-bred third-dam Dream Appeal (Valid Appeal).

Awesome John launched a powerful finish from 10 lengths off the pace to win the Locopa Designs Maiden Hcp (1600m) for trainer John O’Shea and owner-breeder Stan Saric at Kembla Grange.  His NZ-bred dam Jayquin Star (O’Reilly) won a Kyneton 3yo maiden at her second start for Saric and trainer Leon Corstens before retiring to stud.

Saric owned a share of Awesome Rock with the Olives during a Group 1-winning career with Corstens and his other O’Reilly mare Herculian Princess foaled Awesome Rock first-crop filly Shagonarock who won on debut at Ipswich in July.

Corn Cob improved his strike-rate at Geraldton to 9 wins in 14 starts in the Eye Spy Security Hcp (1100m) on Tuesday.  Part-owned and trained locally by Julia Martin for Peter Mavers, he was bred by Dick Vincent using Awesome Rock over Corn Flakes (Oratorio).