Winner of the Week – Soaring Solo 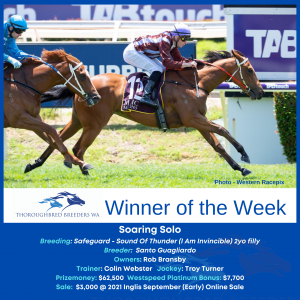 The form out of Saturday’s $100,000 Crystal Slipper Stakes (1100m) is sure to stand up as the 2yo season progresses in Perth.  This year’s edition was a wide open event with Yarradale homebred Platinum Shot (Shooting To Win) going out a $4.40 favourite ahead of five other youngsters in single-figures.

Soaring Solo was in the market following a smart trial at Belmont and she ranged up to Platinum Shot on raceday to win running away by three-quarters of a length.  It kicked off a Group 1 winning day for trainer Colin Webster and it also continued the winning run of Safeguard who became the first WA-based stallion to sire a 2yo winner this season.

“She’s a very good filly and came back under me to settle nicely,” jockey Jordie Turner said.  “She really fought hard in the final 200 metres and there are more wins in store.”

Safeguard (Exceed And Excel) was a Group 3 winner of the Kindergarten Stakes (1100m) at Randwick and Vain Stakes (1100m) at Caulfield for owner-breeder Sheikh Mohammed.  Since retiring to Mogumber Park, his strike-rate has been among the best in WA at a buoyant 68%.

Webster revealed Soaring Solo’s owner Rob Bransby, a former RWWA Board member, was visiting Mogumber Park in Bullsbrook to inspect another horse when a filly caught his eye in an adjoining paddock.

“They told Rob she didn’t go to the yearling sales because she was too small and he was able to buy her for $3,000.  She had shown us plenty in two 400m trials at Belmont – she was green in the first one and won the second easily.

“She was galloped on in the first hit-out and we gave her some time off.  That was the making of her.  She thickened out and is now a decent-looking horse.”

Soaring Solo was bred by Santo Guagliardo and she has a yearling half-sister by Rommel.  They are the first two foals from unraced mare Sound Of Thunder (I Am Invincible).   Her second-dam Tully Thunder (Thunder Gulch) won a Group 1 SAJC Australasian Oaks (2000m) in 2002 for trainer Ross McDonald and jockey Damien Oliver.