Colin Webster received all the kudos, and rightly so, after training Trix Of The Trade to a Group 1 victory in the Railway Stakes (1600m) on Saturday.

He prepares Trix Of The Trade for owner-breeders Bill and Patricia Robinson who banked the biggest Railway purse on record at Ascot.  The race’s prizemoney has also sent former Alwyn Park stallion Trade Fair (GB) to the top of the WA sires’ premiership with earnings of $1.78 million after Day 2 of The Pinnacles.

He had covered 11 books in Western Australia after a career that included a Group 3 victory in the Criterion Stakes at Newmarket for Juddmonte Farms.  A son of Zafonic (USA), like Iffraaj (GB), he sired tough, talented, all-purpose gallopers who could win and keep winning.

Trade Fair’s ashes are interred with a plaque at Alwyn Park where he was a favourite of owner John Andrew and the staff at Serpentine.  “I’ve had lots of calls from people since Saturday saying Trade Fair was the most underrated stallion in Western Australia and I agree,” Andrew relayed on Monday.

“His progeny did best when trained one-on-one.  And if treated right, there wouldn’t be a fight.

“Bill and Patricia have about 35 horses boarding here.  I can remember foaling down Trix Of The Trade.  He was a plain bay colt – nothing startling – but a nice foal all the same.”

He’s the final foal of My Name’s Trixie (Passenger) and his older half-sister Tricky Trix (Universal Ruler), who won five in Geraldton for the Robinsons last year, has just tested positive off a maiden cover to Alwyn Park sire Maschino.

Trix Of The Trade has firmed into $7 to complete a Group 1 double in the Northerly Stakes (1800m) on December 3.  He’s on the third line behind the favourite Amelia’s Jewel ($3) and Godolphin’s imported gelding Cascadian ($4). 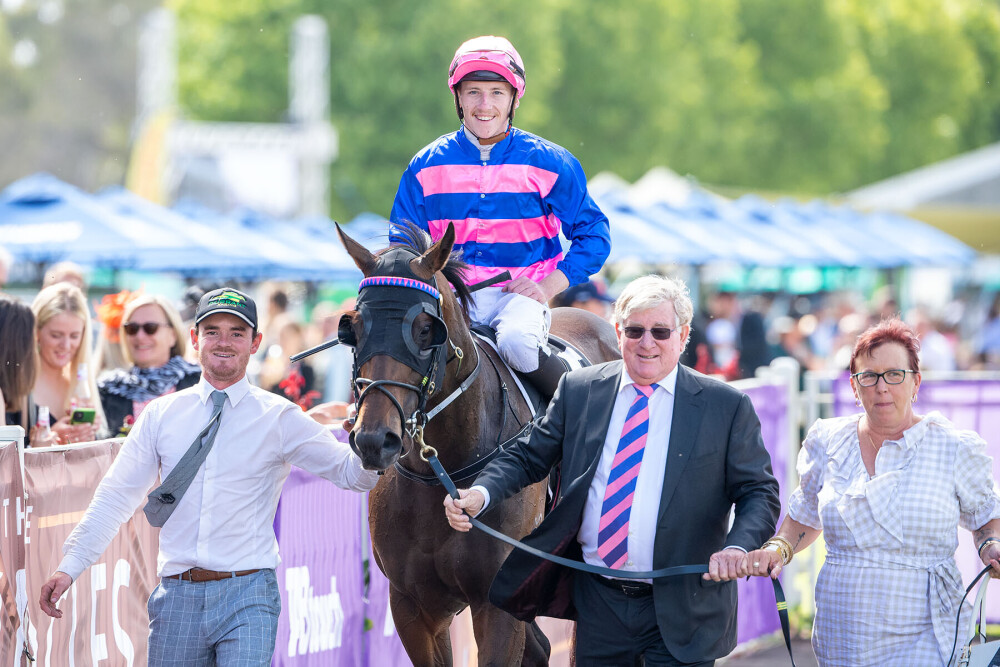 The Railway completed a memorable afternoon for Andrew who is a Life Member of TBWA.  An hour earlier at Ascot, he led in Minsk Moment and Clint Johnston-Porter following their authoritative victory in the LR Carbine Club Stakes (1400m).

Minsk Moment is a homebred for managing part-owner Keith Biggs and Andrew is part of a large syndicate that race the 4yo stallion with Chris Waller.  He flew in from Melbourne five days prior to his Perth debut and settled in straightaway.

“He has pulled up perfectly after Saturday,” Andrew revealed.  “We went down and saw him at Adam Durrant’s stable last week and he’s such a laidback character.  Chris rang Keith and is keen to get him back east for the autumn carnivals.

“Nothing has been discussed long-term and coming back here to stand at stud is only a possibility at this stage.”