Black-type in waiting for Bradbury’s Luck

Perth gallopers Burnya To Survive and Gunmetal Grey are knocking on the door to win at black-type level for former Yarradale Stud sire Bradbury’s Luck.

When Bradbury’s Luck (Redoute’s Choice) passed away in April, he had reached double-figures for individual winners in Stakes company and the best of them has been WA Horse of the Year Luckygray.  The Gino Poletti-trained grey galloper was a Group 1 winner of the 2011 Railway Stakes, 2012 Kingston Town Classic and 2013 Railway Stakes. 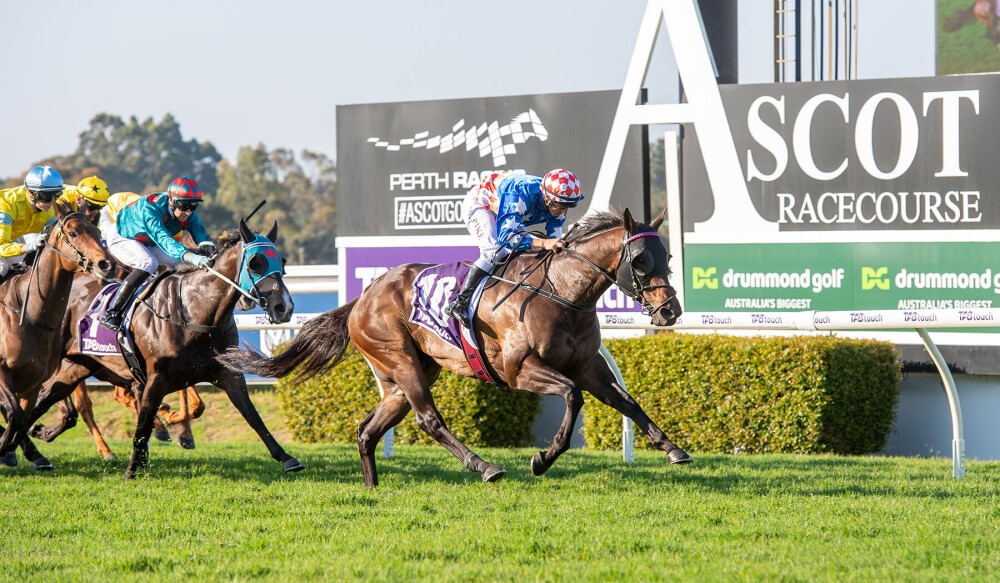 Burnya To Survive (Photo / Western Racepix) was tagged a ‘Stakes-winner in waiting’ by The West Australian in light of a last-to-first victory in the final race at Ascot on Saturday.  He was resuming after a spring spell and appreciated the addition of blinkers and a good surface.

“He has a daisy-cutter action and doesn’t like soft tracks,” trainer Jason Miller said.  “I was a bit worried because they weren’t making up ground but Willie (Pike) had not won a race all day and he was hungry.”

Burnya To Survive (5g Bradbury’s Luck – Baleen In Me by Flying Pegasus) started a $4.20 favourite and punters erupted when he exploded to win running away from Weaponson (Oratorio).

It improved his strike-rate to 5 wins in 8 starts earning $144,000 for a syndicate that have been strong stable supporters.  “They’ve been patient and deserve to get a good one,” Miller continued.  “He’s had a few niggling issues that forced us to give him time and that’s worked in his favour.”

Gold Front Thoroughbreds bred him from Ascot winner Baleen In Me who foaled a black filly by Awesome Rock in September.  It’s the extended family of Group 1-winning fillies Goleen (VATC One Thousand Guineas) and Judyann (WATC Oaks).

Bradbury’s Luck mare Gunmetal Grey charged home to finish a one-length second to Buzzoom (Safeguard) in the LR Jungle Dawn Classic (1400m) earlier on Saturday.   She is trained by Ross Price and will appreciate an extra furlong in the LR Starstruck Classic (1600m) on December 17.

Bradbury’s Luck has four colts on the ground to date from a limited last book at Yarradale in 2021.  Among them is the half-brother to last week’s Bob McPherson-trained Belmont winner Playhouse Patron (Patronize).