Group 1 for Geisel Park’s All American

Geisel Park stallion All American was represented by his first Group 1 winner as a broodmare sire on Sunday when Liberty Island (Jpn) trounced her rivals in the Hanshin Juvenile Fillies (1600m).

Liberty Island (pictured) is by ill-fated sire Duramente (King Kamehameha) and is the second foal from Yankee Rose (All American) who was a Group 1 winner of the 2016 ATC Sires’ Produce Stakes (1400m) and Spring Champion Stakes (2000m) at Randwick. 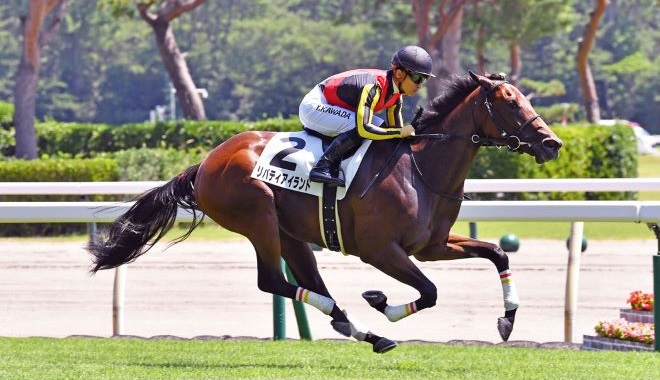 Starting a $2.60 favourite in the AUD1.35 million end-of-season grand-final for 2yo fillies, she broke smoothly and sat midfield before accelerating effortlessly when asked by jockey Yuga Kawada.

“The filly felt comfortable and I just concentrated on maintaining the good flow and rhythm,” Kawada told www.japanracing.jp  “She cruised along smoothly and her response was just as I had imagined.

“She has progressed well and winning this big championship race has given us a promising view on what to expect in the future.”

Liberty Island had won on debut at Niigata in July and just missed by a neck to Ravel in the G3 Artemis Stakes (1600m) at Tokyo in October despite meeting traffic in the stretch.

Yankee Rose is owned by Northern Racing’s Katsumi Yoshida and she has a yearling colt by Lord Kanaloa, a filly foal by Kizuna and was mated with Contrail this year.

Meanwhile, Geisel Park stallion Manhattan Rain has sent his prizemoney earnings through $1 million this season with a winning double in Victoria.

She was a last-start Penshurst maiden winner and was given the run of the race by Harry Grace to defeat British import Fuji (Muhaarar).  “When Harry let her down, she hit top gear and that was a decisive win,” Dabernig’s Racing Manager Dara O’Meachair said.  “That first win really brought her on and she has ability.

“Not many break their maiden and then win again but Tom is patient and knows how to place them.”

“Southern Front did a great job first-up tonight,” King said.  “He’s gone through the grades and stepped up like a good horse.  He’s a typical Manhattan Rain and doesn’t need a lot of training.”

Winning jockey Hannah Edgley admitted it was a massive honour to ride King’s first city winner.  “Steve is a tremendous person,” she said.  “He’s laidback and was very helpful telling me to build momentum and the horse would do the rest.”