Rock My Way – Winner of the Week 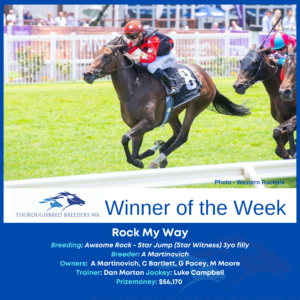 Rock My Way flew home to complete an opening double for Gold Front Breeding & Racing and apprentice Luke Campbell in the Quayclean Plate (1400m) at Ascot on Saturday.

The daughter of Gold Front stallion Awesome Rock had won on debut at Northam last month and she went right on with the job on Day 5 of The Pinnacles.  “She’s an unassuming filly and didn’t really flatter at the trials before we took her up to Northam,” trainer Dan Morton revealed.  “Luke rode her perfectly up there and this looked a soft option for a Saturday race at Ascot.

“She’s tough and enthusiastic no matter what we serve up at trackwork.  She probably saves her best for raceday and is bred to stay from a stout family.”

Rock My Way is the second and final foal from Star Jump (Star Witness).  Second-dam Zubara (Zabeel) is a sister to Landlocked (LR Wagga Gold Cup) from the family of Group 1 winners Light Up The World and Bentley Biscuit.

“There weren’t any expectations up at Northam but she travelled into the race and won really well,” Campbell said.  “She was very green that day but improved and was relaxed today.  I was able to get on the back of the three-wide line and she was so strong finishing through the line.”

Campbell had won the first race on Gold Front homebred Acromantula in the TABtouch Hcp (1000m).  Trained by Pearce Racing for Alan and Sue Olive, he’s a noted front-runner and has won 6 races at Ascot for over $313,000 in prizemoney.

Acromantula is a son of Champion Australian sire Written Tycoon from For Your Eyes Only (Bletchley Park) who was a Listed winner of the 2009 Gimcrack Stakes & Ascot 1000 Guineas and 2010 Beaufine Stakes.

On Sunday, Rockstar Status filled out a weekend treble for Gold Front in the Festive Racing Hcp (1413m) at Pinjarra.  Another daughter of Awesome Rock, she was an on-pace maiden winner at Pinjarra in April and wasn’t for catching under Troy Turner yesterday.

Rockstar Status cost $37,000 from Gold Front at the 2020 Perth Magic Millions and is trained by Tiarnna Robertson for a syndicate managed by Marj Ojapold.  She’s a full-sister to Awesome John who won again for trainer John O’Shea at Hawkesbury last Sunday.