Yarradale on Front foot at The Pinnacles

Yarradale Stud took a lead from Gold Front with a running double of its own on Day 5 of The Pinnacles at Ascot.

War Gem (War Chant) and Capital Flight (City Place) have built exceptional strike-rates this year and the Gidgegannup graduates were both tuning up for their latest campaigns on Saturday.

Neville Parnham purchased War Gem for $170,000 from Yarradale at the 2020 Perth Magic Millions and he ticked off that price-tag with a come-from-behind victory in the TABtouch Platinum Hcp (1200m).

“Kesh (Dhurun) rode him beautifully today and hopefully we can get enough work into him to get out to a mile and further,” Parnham said.  “He’s been plagued by hoof problems and a bar shoe with plenty of swimming helps when we have to ration the workload.

“To be honest, it can be hard work but he has loads of ability.” 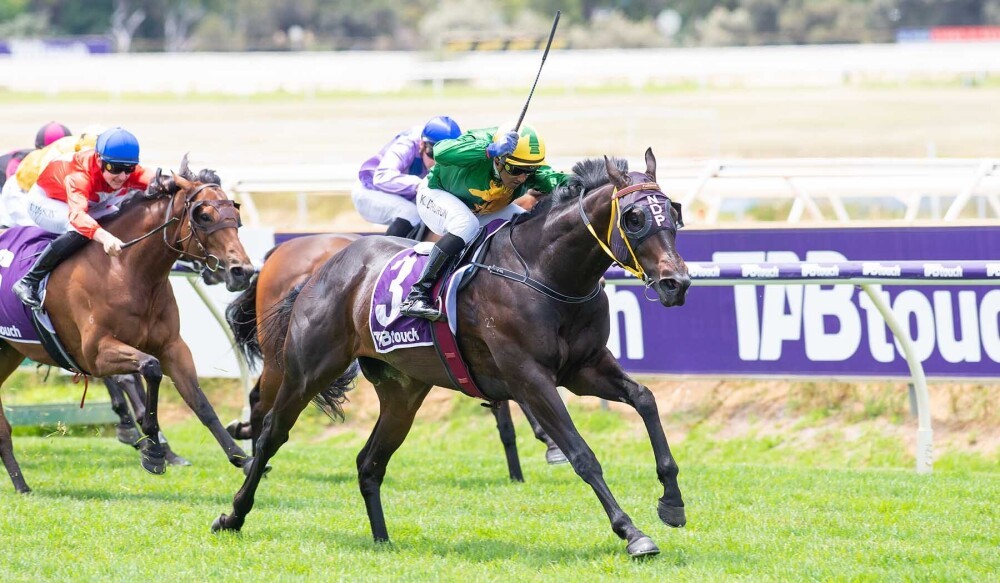 War Gem (Photo / Western Racepix) is raced by a partnership managed by Yarradale’s Lyn Sayers and he had won two in a row in town during a winter prep before finishing fifth in the LR Belmont Guineas (1600m).

He was being set for the LR Belmont Classic (2200m) but was a late scratching due to foot soreness.

He’s the fourth foal out of Diamonds’n’dreams (Viscount) and follows her previous winners by Trade Fair (GB), Musket and Discorsi.

The mare has a yearling colt and a filly foal by Yarradale champion War Chant (USA).

Capital Flight took up where he left off last season winning effortlessly in the Crown Perth Hcp (1000m).  It also brought up a treble for apprentice Luke Campbell who had partnered Gold Front winners Acromantula and Rock My Way earlier on Saturday.

A final-crop foal by former Yarradale sire City Place (USA), he has now won five a in row since a Northam maiden in June.  “He’s a super horse and tries his heart out,” Campbell said.  “I put him in the box-seat behind the leaders and he has the best acceleration of any horse I’ve ridden.”

John Chalmers bought him for $26,000 as agent on behalf of former Group 1 winning trainer Frank Maynard.  His dam Flying Affair (Heritage) won the 2011 renewal of the LR Gimcrack Stakes at Ascot and she has a yearling colt by Gingerbread Man and a filly foal by Rommel.

Red Can Man represented trainer Steve Wolfe and Yarradale sire Gingerbread Man in the $1.5million G3 Gold Rush (1400m) on Saturday and was only beaten a length and change by The Astrologist.  “He enjoyed a good run early but couldn’t get going when we needed to,” stable jockey Shaun McGruddy reported.  “He was a bit stiff not to run a drum.”