Scenic Lodge staff celebrated another successful season at the TBWA Awards on December 17 and, not to be outdone, the Scenic Lodge roster followed up with 8 winners in 8 days on either side of Christmas.

The Muchea stud won Breeder of the WA 3YO Of The Year with Black Fantasy (Blackfriars) who claimed Listed victories in the Aquanita Stakes (2000m) and Belmont Classic (2200m) in July.  He was bred and sold by Scenic Lodge for $36,000 to Pearce Racing at the 2020 Perth Magic Millions and earned over $443,000 last season.

Its Top 10 stallions Snippetson and Universal Ruler shared 7 of the 8 winners before Dash For Cash shut the gate with Planet Cash at Belmont on Thursday.  Despite deviating in the straight, he launched a late bid down the centre of the track to win a 1200m maiden second time out for trainer Hayden Ballantyne. 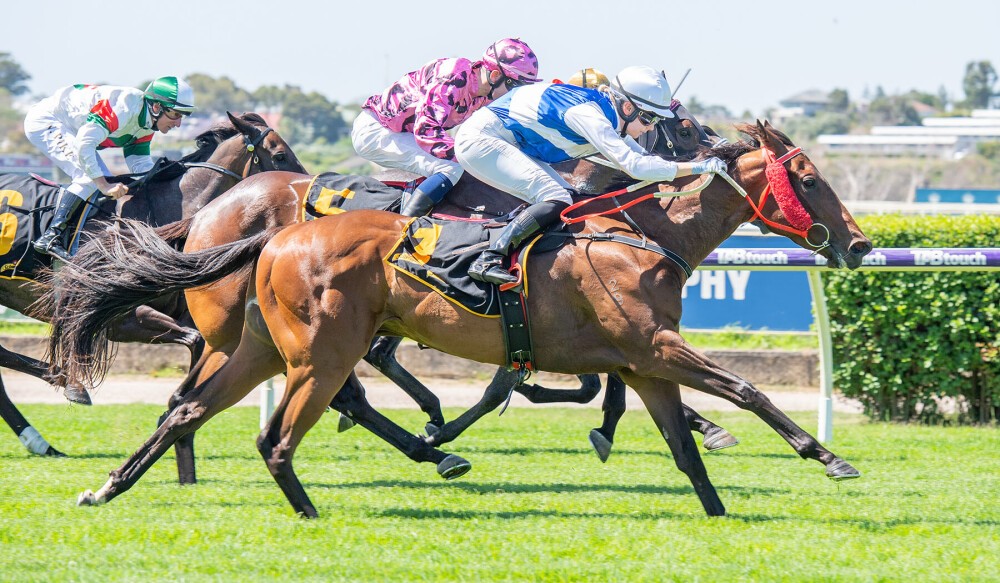 Planet Cash (Photo / Western Racepix) rocketed home from last despite being baulked when Stevie’s May bumped Tropical Sun at the top of the straight.

The untapped 3yo returned the favour and then raced clear for Lucy Warwick who changed hands with the whip passing the furlong.

“I thought he might have jumped a bit better but he relaxed with cover,” Ballantyne said.  “I told Lucy he would do the rest and that turn of foot proved it.  He’s still raw but we could have a good horse harnessing that natural ability.”

Planet Cash had been runner-up to Cosmopolitan Girl (Safeguard) at Northam in September and the winner went to town to complete a hat-trick at Belmont.  “The track was pretty hard that day and he pulled up shin-sore.  We tipped him out for six weeks and he came back much bigger and stronger.

“I’ve liked him from the first time I saw him.  There were two horses in a paddock and I told the owner I would train the other one for free if I could have this bloke, too.”

Bred by managing part-owner Karl Kazmer, he’s by Dash For Cash from Belmont winner Planet Claire (Zedrich) who is two for two at stud having foaled Belmont winner Astro Warrior (Demerit) for the same connections.

Dash For Cash, 24, is in the twilight of a stud career that has generated 408 individual winners at a 65% strike-rate.  “He covered Planet Claire again this season and has been serving similar numbers for the last couple of years,” Scenic Lodge general manager Jeremy Smith reported.

The grand old grey was a Group 1 winner in his prime at Flemington and Caulfield for colourful trainer Rick Hore-Lacy.  He was also beaten a head by Northerly when runner-up in the 2002 Turnbull Stakes.

His latest crop of foals on the ground includes a filly from NZ-bred mare Jean (Volksraad).  The mare’s six winners to date include Mr Genoa (Blackfriars) who won 7 races in WA and Victoria topped by the 2019 Country Championship Final at Ascot.

Snippetson heads the Scenic Lodge roster and he started the win-a-day strike-rate with Kerman Rock in the Envirapest Hcp (2200m) at Ascot last Wednesday.  He sailed clear along the Swan River side and went further ahead in the straight to bolt in by more than 10 lengths!

Universal Ruler mare The Velvet Queen scored a completely contrasting victory at Ascot on Christmas Eve when she came from nowhere to nail the favourite Casino Seventeen in the Quokka Slot Hcp (1500m).

The Velvet Queen has been a model of consistency this year for Impressive Racing owner-trainer Darren McAuliffe and she has earned a deserved black-type debut in the G3 La Trice Classic (1800m) on New Year’s Day.