Megami started an odds-on favourite for the Free Entry To Belmont Hcp (1700m) on Wednesday and she looked a good thing bowling along in front for Willie Pike.

Unfortunately for favourite punters, the Playing God mare was running on empty halfway down the straight and was an easy target for Patronize outsider Playhouse Patron who had to be stoked up by Joe Azzopardi approaching the home turn. 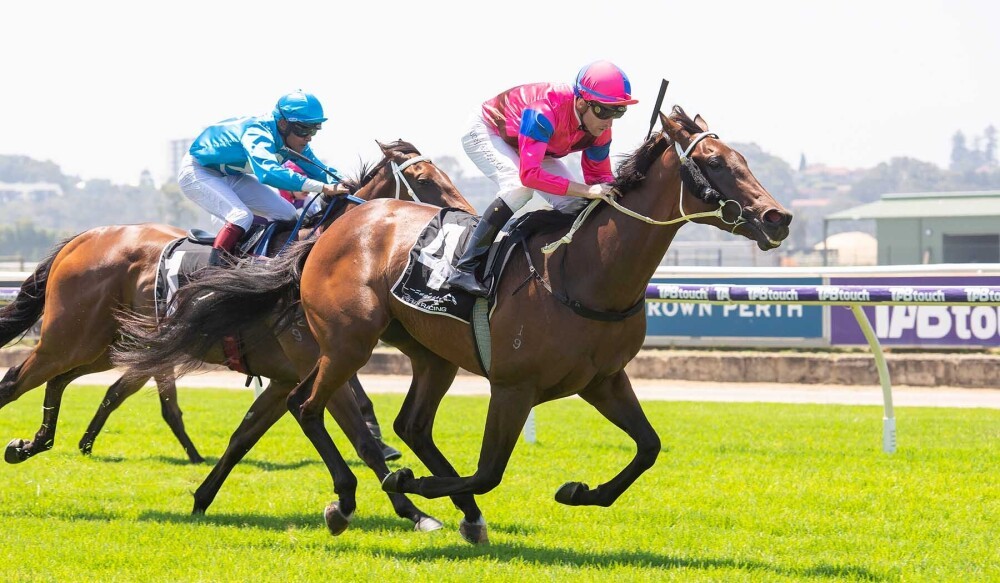 Playhouse Patron (Photo / Western Racepix) had shown ability in juvenile black-type events and signed off his autumn prep with a fast-finishing midfield finish in the G2 Karrakatta Plate (1200m).

“He’s been a bit of an enigma and should have won a race by now,” trainer Bob McPherson said.  “I thought he was chance in the small field today but wasn’t confident until the furlong.  He’s from a good mare and is looking for further ground.”

Azzopardi was back at work after a holiday and earned his percentage on the winner.  “He trialled like a jet but is getting more dour the further into this prep.  He can be bit quirky but it panned out with the speed up front to claim them late.”

McPherson and his wife Jan race Playhouse Patron with his Bunbury-based breeder Betty Lammie.  His dam Playhouse Theatre (Racer’s Edge) won races at Ascot (2) and Belmont for the same connections and her latest is a God Has Spoken colt foaled in October.

Her first foal West End Theatre (Rogano) retired unraced after winning a 3yo barrier trial at Lark Hill.  She has a yearling colt by Gingerbread Man and delivered a Ducimus colt for Lammie in October.

Playhouse Patron is the 115th individual winner by Patronize (Redoute’s Choice) who stands at Darling View Thoroughbreds.  His 73% winners-to-runners record is one of the best strike-rates among stallions based in WA.

His Darling View barn-mate Playing God made up for Megami’s loss later in the day at Belmont with Sky Duke (Morley Growers Market Hcp) and Playing Up (Schweppes Hcp).