Divine Flirt had been her own worst enemy before a belated breakthrough at Belmont earlier this month.

The daughter of Darling View Thoroughbreds sire Playing God didn’t relax during short bursts as a 3yo and 4yo but is finally coming good for part-owner and trainer David Harrison.  Following the afore-mentioned, two-length victory in the TABtouch Maiden (1650m) on November 10, she was runner-up to Ciao Luna at Belmont on November 20.

Ciao Luna (Dissident) led home a quinella that day for Darling View’s Clive Atwell.  He bred and sold her for $120,000 at the 2021 Perth Magic Millions through the draft from Western Breeders Alliance.

Divine Flirt’s connections will roll the dice again in That’s A Wrap For 2022 Hcp (1400m) at Northam this Thursday.  The 5yo mare has opened a $3.50 co-favourite with TABtouch in the Avon Valley. 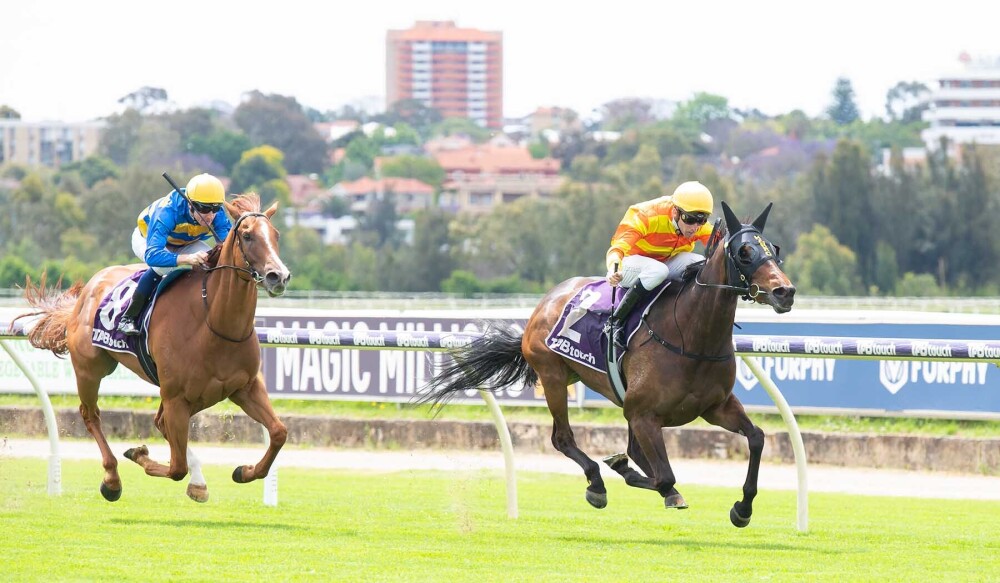 Harrison bought Divine Flirt (Photo / Western Racepix) for $80,000 from Mungrup Stud at the 2019 Perth Magic Millions.  “She was a hard goer and would not settle,” he recalled.  “I began leading her off a buggy at home and she’s more comfortable now although she can still be reluctant to go between runners.

“Ear-muffs have also helped and we will leave them on while she’s getting it right.”

Divine Flirt is the second winner from two to race from O’Flirty (O’Reilly) who was a Listed winner of the 2004 Lindsay Rosenthal Stakes and Burgess Queen Stakes when trained by Harrison prior to a transfer to David Payne at Randwick.

Her 4yo Let The Talk (I’m All The Talk) is knocking on the door for Ash Maley and her final foal before being pensioned is 3yo Flirt A Lot (A Lot) who is with Bruce Watkins at Capel.

Harrison also prepares Playing God 3yo filly Devine Belief for many of the same owners in Divine Flirt and she was most impressive winning a Northam maiden at her second start in September before going out for spring spell.

Playing God (Blackfriars) is currently locked in a premiership battle with deceased Alwyn Park sire Trade Fair (GB) while proving as popular as ever at Darling View this season at a $27,500 (inc GST) service fee.

He was unlucky on Day 2 of The Pinnacles when Comfort Me (G1 Railway Stakes), Bustler (G2 WA Guineas) and Baby Paris (LR Jungle Mist Classic) all finished second but the tide can turn on Day 4 with Bustler ($9), Alaskan God ($14) and God Has Chosen ($35) all engaged in the Group 1 Northerly Stakes (1800m) at Ascot this Saturday.