Scenic Lodge supplied a double at Ascot on Saturday with Soviet Spy (Blackfriars) breaking his duck this campaign and The Velvet Queen (Universal Ruler) producing a scintillating turn of foot to win for the third time this season.

Soviet Spy is trained by Adam Durrant and is a full-brother to G1 ATC Metropolitan Hcp (2400m) winner Come Play With Me.  He’s some way from reaching that level, however, there was plenty to like about his victory in the TABtouch Hcp (2100m).  “There were a half-dozen winning chances but Soviet Spy had been working well and was guided sweetly by Willie Pike,” Durrant said.  “It was a bit of a raffle on paper but our bloke got the right run from a wide draw.

“He had been working well and that last-start loss at Geraldton was a forgive run.  He was a bit flat that day and, together with the travel, I may have squeezed his runs too close together.”

Soviet Spy is a 5yo stallion from the penultimate crop of Scenic Lodge legend Blackfriars and is one of five winners from Russian Playmate (Dr Johnson).  That cross has an incredible 79% strike-rate.

He was bred and sold by Scenic Lodge for $50,000 at the 2019 Perth Magic Millions.  Russian Playmate’s most recent foal is a yearling colt by Blackfriars sire Playing God. 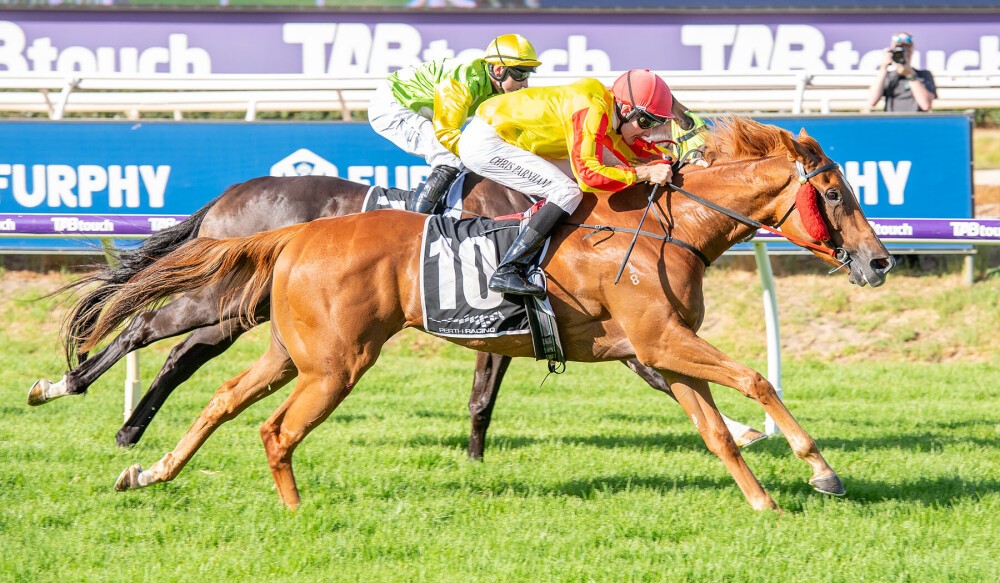 The Velvet Queen (Photo / Western Racepix) scored a electrifying victory in the Celebration Of Life Trophy (1500m) after giving front-runner Big Screen a six-length start in the straight.  She had launched a similar finish last time out in the G3 La Trice Classic (1800m) but came up a neck short to Alsephena (Star Turn) on New Year’s Day.

“She has the best turn of foot of any horse I’ve ever trained,” Impressive Racing’s Darren McAuliffe declared.  “She’s getting better as she matures and is probably twelve months away from reaching her ceiling.

“It’s exciting to have her in the stable and I’m sure she will be winning black-type races in the next season or two.”

Saturday’s result was the 500th career-win at stud for Universal Ruler.  The Velvet Queen is the final foal from Doubleblack Velvet (Show A Heart) and she’s a younger full-sister to The Velvet King who won four black-type races for Impressive Racing to Group 3 level in the 2021 Belmont Sprint (1400m).

Universal Ruler has 20 yearlings catalogued for the Perth Magic Millions next month with 12 of them from Scenic Lodge.  First to parade from home base (as agent) is the colt from Perugino mare Dance On Air (Lot 76).  The best of her three winners to date is undoubtedly Impressive Racing’s flying mare Clairvoyance (Nostradamus) who has won 7 races in 11 starts topped by last year’s LR Pinjarra Classic (1300m).