Winner of the Week – A Lot Of Good Men 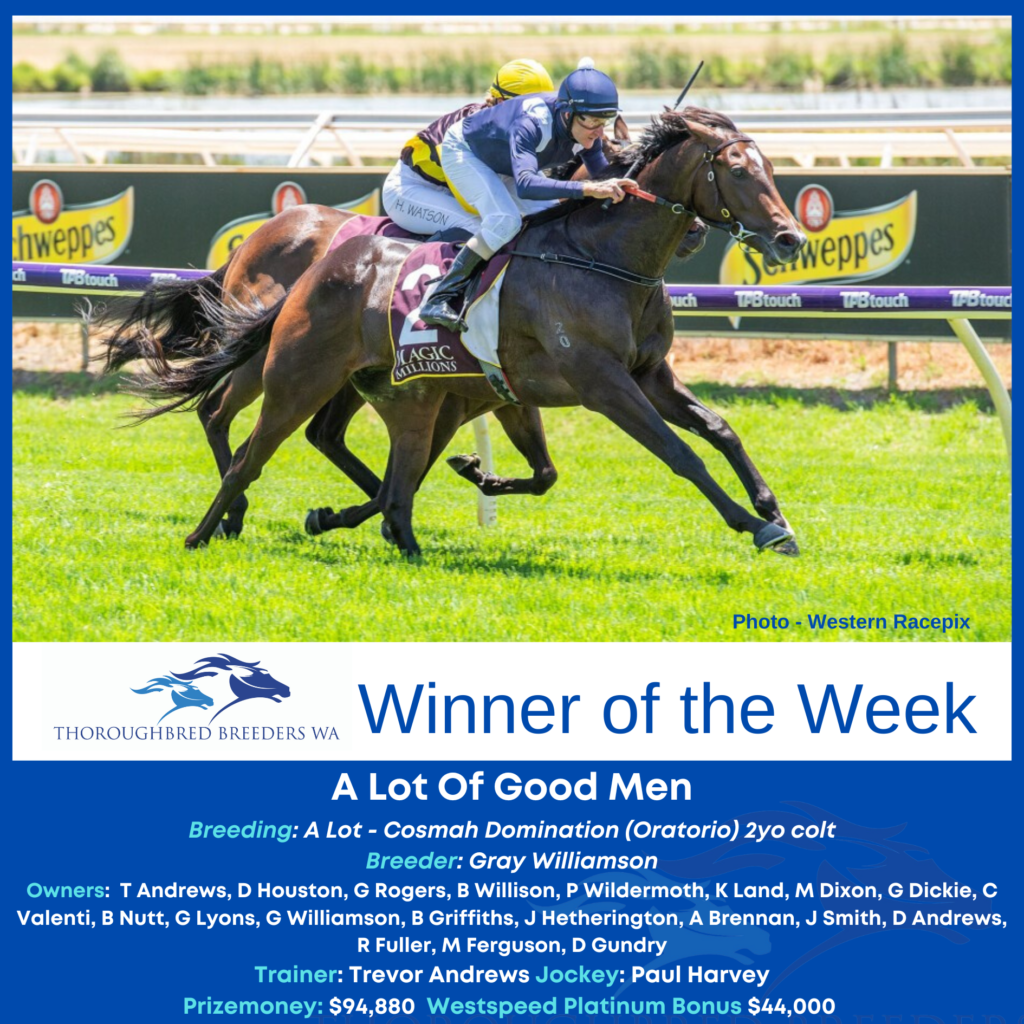 A Lot Of Good Men has advanced his claims for the Magic Millions Classic (1200m) next month with a dominant first-up victory over 1100m at Ascot.

The progressive 2yo colt by Willaview Park sire A Lot (USA) was a class above the opposition on Saturday.  After settling in the running line for Paul Harvey, he angled wide into the straight and it only took a furlong to nullify a four-length margin held by If I Din Havadime (Alfred Nobel).

It will surely be the springboard to a black-type career for A Lot Of Good Men who is a half-brother to LR Fairetha Stakes (1400m) winner Bustler (Playing God).  He had been placed on debut in the Initial Plate (1000m) in October.

Another Ascot nursery over 1100m on February 4 will be a dress-rehearsal for the RL Magic Millions 2YO Classic (1200m) at Pinjarra on February 18.  It’s worth $250,000 and, as the name implies, his owners will not be eligible for the Racing Women’s Bonus.

“He flew home and he’s a true professional,” trainer Trevor Andrews said.  “He had trialled nicely at Lark Hill and the experience of that first start gave him an advantage.  We don’t want to get too far ahead of ourselves but he’s in good order and with natural improvement will be hard to beat in the Magic Millions Classic.”

Mungrup Stud imported his sire A Lot (Tapit) to the Great Southern in 2018.  A North American national record-holder over 1400m on turf (1.19.23s), he initially stood at Mungrup Stud and is now based at Willaview Park.

A Lot Of Good Men’s damsire Oratorio followed up with a winning double on Saturday with Halatorion (Own The Dream Hcp) and Weaponson (John Davison Memorial).  Oratorio (Stravinsky) won five WA 2YO titles while based at Mungrup Stud and he’s in retirement at Willaview Park.