Sky’s the limit for Alaskan God

The sky’s the limit for promising stayer Alaskan God following his explosive victory in the G2 WATC Derby (2400m) at Ascot.

Trainer Dan Morton knows how fit a horse for the big stage and they don’t come any bigger than the race that stops a nation.  “After we bought him as a yearling at the Magic Millions, I jokingly said to the owners that if I’m ever going to win a Melbourne Cup, this is the horse! 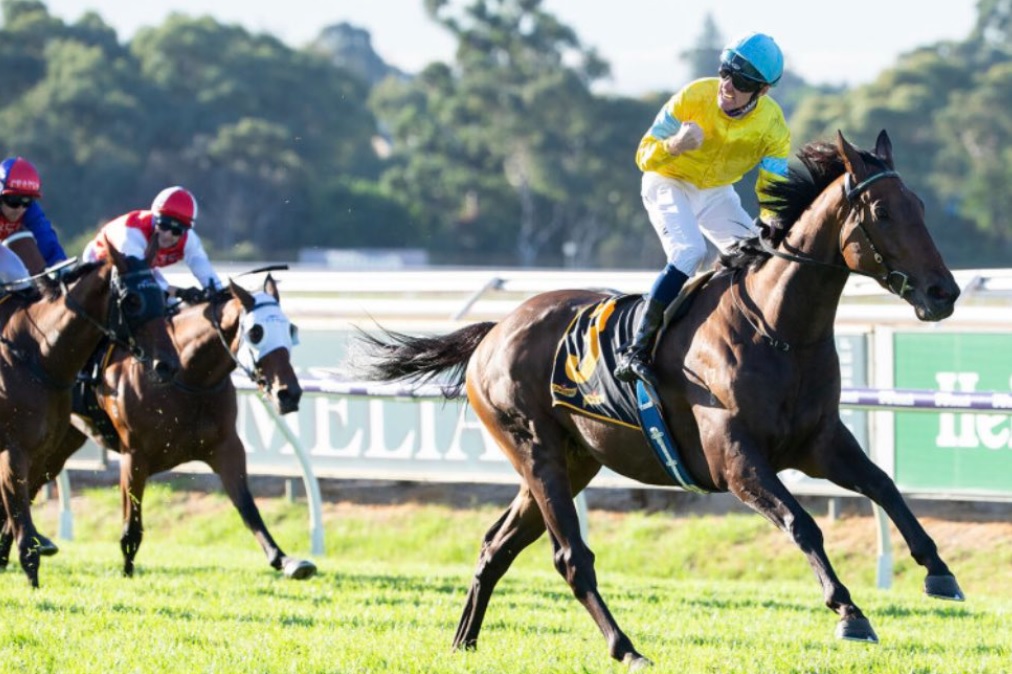 “Alaskan God (Photo: Western Racepix) will go to the paddock and he’s the sort of horse I would like to set for the Victorian spring carnival.”

Morton sent Scenic Blast east for a memorable Flemington Group 1 double in the 2009 Lightning Stakes and Newmarket Hcp prior to a Royal Ascot Group 1 in the King’s Stand Stakes.

“He’s still raw and there’s a lot of upside,” Morton added.  “He will keep developing and I will have a discussion with the owners about plans for Melbourne.”

Alaskan God (3g Playing God – Lady Alaska by Reset) was unplaced on debut at Northam in October but it’s been clear sailing this year.

He returned to win a Pinjarra maiden in February and followed up with four victories at Ascot for earnings of $425,200.  That total includes Westspeed bonuses of $88,900.

Under a perfect ride by Chris Parnham on Saturday, he stormed home from the second-half of the field with brilliant turn of foot to score by more than three lengths from Pale Rider (Rommel) and Black Fantasy (Blackfriars).

“I’ve been feeling the pressure because I’ve always wanted to win the WA Derby,” Parnham admitted.  “He’s untapped and I just had to point him in the right direction.  He’s going to be a much better horse next preparation.”

Darling View champion Playing God (Blackfriars) is taking all before him this season but Alaskan God can go one better than his sire later this year.  In 2010, Playing God won the G1 Kingston Town Classic at Ascot before travelling to Victoria where he was placed twice in Group 1 events at Flemington behind Shamrocker (NZ) and Melbourne Cup winner Shocking.