Snitzel speed-machine Splintex has been purchased to stand at Darling View Thoroughbreds in Western Australia.

He will head west in a deal brokered by agent Mark Player on behalf of NSW owner-breeder Geoff Grimish.  “Splintex is a perfect fit for WA,” Darling View’s Brent Atwell said on Tuesday.  “His race record and pedigree is good enough for the Hunter Valley and it gives our breeders the chance to keep their mares here.

“The Westspeed Platinum Scheme for 2yo and 3yo races are really lucrative in Perth.  A fully paid-up Saturday winner banks $88,000 with the bonuses.  That’s why we targeted the speed influence of a Group winning son of Australia’s Champion sire Snitzel.” 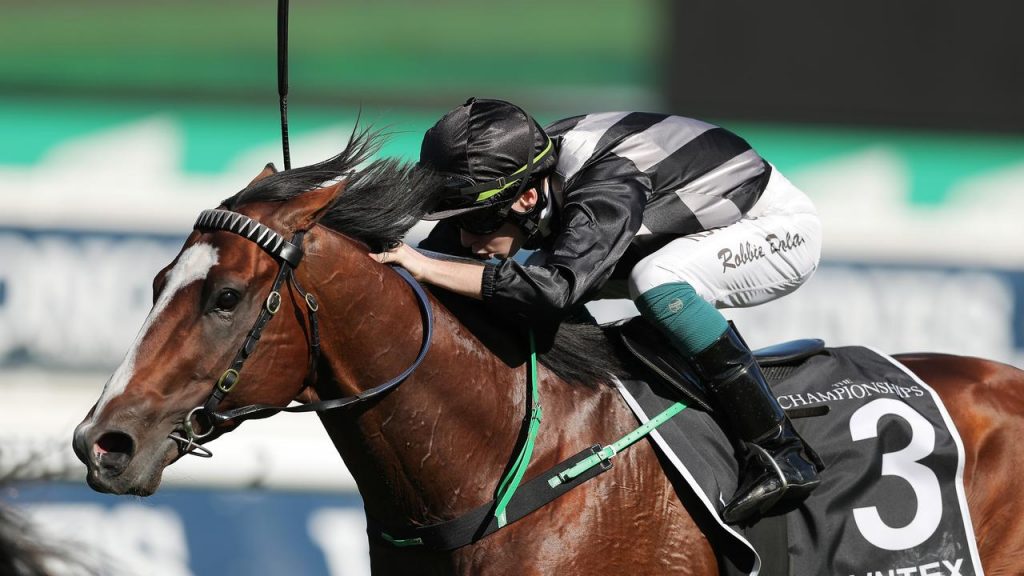 Splintex (pictured) was trained by Mark Newnham at Randwick and broke his maiden on home turf as an autumn 2yo.  He doubled up at Rosehill ahead of a winter spell with another front-running victory over Vinery Stud’s Group 1 winning stallion Exceedance.

Back in work as a 3yo, Splintex was a short-course winner again at Randwick and Rosehill before graduated to his first Group 2 victory in the $500,000 Arrowfield Sprint (1200m) at Randwick.  Firming from $26 into $9, he took over 300m from home and kept lifting to deny Godolphin’s classy filly Flit on Day 2 of The Championships.

“I’ve ridden him since he was a very young horse and have always believed in him,” jockey Robbie Dolan said.  “He stuck out his nose right on the line and to win such a big race is like a fairy tale.”

Grimish and his wife Mary were happy to keep Splintex in work instead of shipping him off to stud and they were rewarded with a Group 3 in the Hall Mark Stakes (1200m) during last year’s Anzac Day meeting at Randwick.

“I galloped him on the course proper here earlier this week and was confident he would get the job done today,” Newnham revealed after the half-length win over Godolphin sprinter Ranier.  “He drew the outside barrier in The Galaxy last start and you don’t win a Group 1 over 1100m at Rosehill from out there.

“He doesn’t win these big races by big margins but he’s brave and genuine and that’s what counts.  And this is a really important win for Geoff because Anzac Day means a lot to him.”

Grimish selects military themes for most of his horses and Splintex is named after the shells that helped save his life and many of his army mates at the Battle of Coral-Balmoral during the Vietnam War.

Splintex started this season with a hit-and-run raid to Melbourne for the Group 2 Bobby Lewis Quality (1200m) where he ambushed a top-class field of sprinters at Flemington.  With Craig Williams aboard for the first time, he gave star mare Away Game weight and a half-length beating after a battle of attrition down the straight six.

“He changed legs a couple of times and the pressure was on with Away Game chasing us carrying just 53kg,” Williams said.  “But he really wanted the win and he deserved it because she’s no easy competition, that’s for sure.”

Splintex signed off a sound horse with 7 wins in 24 starts for earnings of $1.18 million.  “He performed whether it was wet or dry and he’s the type of horse that can make a very nice stallion,” Newnham said.  “The likes of I Am Invincible, Written Tycoon, So You Think, Dundeel and Spirit Of Boom all raced beyond their 3yo season and they’ve sired stakes-class horses at all levels.

“When you go to the yearling sales you go there to buy a racehorse.  If Splintex can throw his ability and will to win into his stock, trainers will love them.”

Splintex (5h Snitzel – Acquired by O’Reilly) will stand for an introductory fee of $11,000 alongside Playing God (Blackfriars) and Patronize (Redoute’s Choice) at Darling View.  Atwell had been in the market for a suitable stallion following the death of his immediate stud success I’m All The Talk (Stratum) in January.