Headwater 3yo filly Honey Dew landed in the sweet spot for former AFL footballers Peter Sumich and Brad Hardie in the Morley Growers Market Hcp (1200m) at Belmont on Wednesday.

Trainer Jim Taylor gave her part-owners the option of scratching after Honey Dew (Photo / Western Racepix) drew barrier 20 when weights were released but they went ahead and she firmed from $17 into $11 before overcoming the odds to score by a length from Nobel Knight (Alfred Nobel). 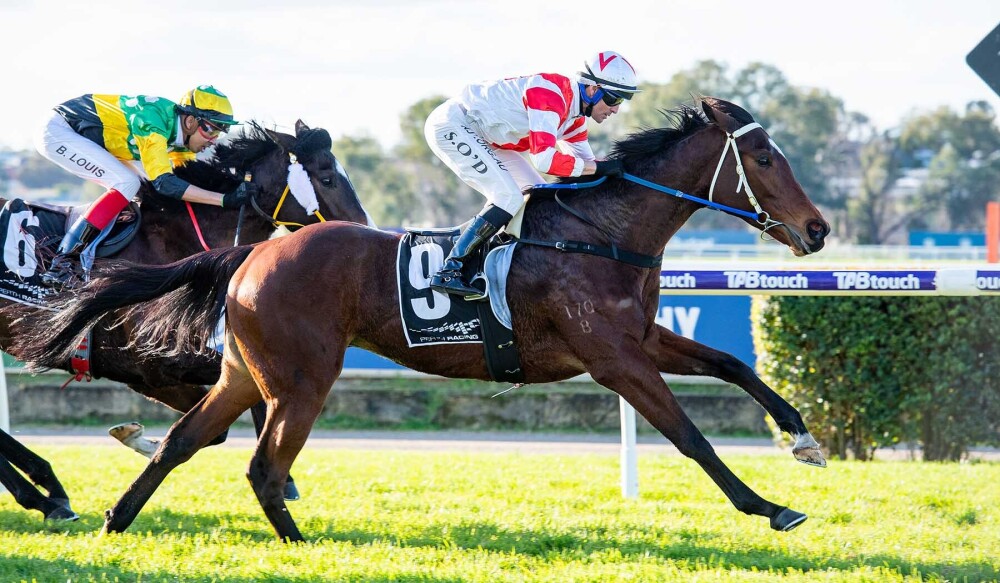 Sumich was a pivotal full-forward for West Coast Eagles in their 1992 and 1994 flags and Hardie won a Brownlow Medal with Footscray in 1985.  They’re both South Fremantle juniors and Honey Dew carried the Bulldogs red and white colours to victory at Belmont.

“I told the boys she would do it tough from out there but they told us to have a crack,” trainer Jim Taylor revealed.  “It was a great ride by Shaun (O’Donnell).  She settled three-wide but with cover and it was a good performance.”

It was also a victory to savour for Mogumber Park owners Colin Brown and Fiona Lacey.  They bought her dam Tej (Bernardini) for just $13,000 at the 2021 Inglis Australian Broodmare Sale carrying a full-brother to Honey Dew.

The Headwater colt will be eligible for the 2023 Perth Magic Millions Yearling Sale.

“She can be a hard-going type and jumped much better than I wanted but we got some cover and she switched off,” O’Donnell reported after unsaddling Honey Dew.  “There was a lot of horse underneath me when she presented and it was a good win.”

Meanwhile, Mogumber Park’s Hong Kong-based graduate Packing Award is poised to continue his rise up the ranks at Happy Valley next Wednesday, July 13.  The son of Shamus Award has won four times in a dozen starts for owner Edmond Lee Man.

Mogumber Park sold Packing Award as a yearling for $52,000 at the 2019 Perth Magic Millions and his value escalated to $550,000 later that year at the NZB Ready to Run 2YO Sale.  “He’s a nice horse and has come from an awkward situation in every win for me,” trainer Peter Ho said.  “That means he’s got some quality and I hope he can finish the season strongly.”

Immediate stud success Rommel (Commands) heads the Mogumber Park roster at $7,700 alongside Safeguard (Exceed And Excel) who is priced at $4,400.  Both fees (inc GST).