Ash Maley is challenging for a Top 10 spot on the WA trainers’ premiership following a double with Arnie’s Boy and Warm ‘n’ Fuzzy on Saturday.

Arnie’s Boy is by Darling View Thoroughbreds stallion Patronize while Warm ‘n’ Fuzzy is a son of I’m All The Talk whose final foals will begin arriving at the Mundijong stud next month. 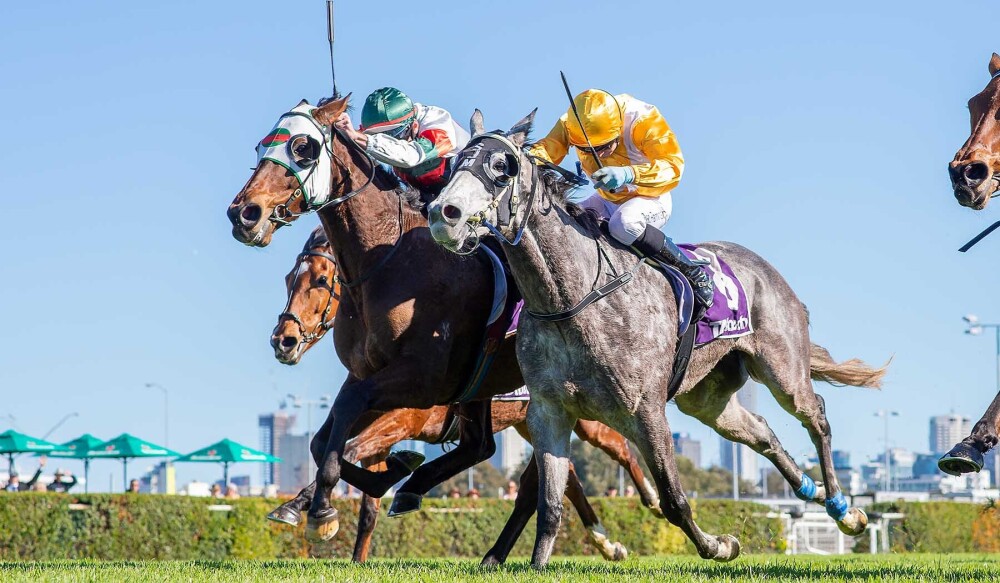 Maley didn’t know what to think after Arnie’s Boy (Green cap: Photo / Western Racepix) prevailed in one of the closest finishes seen at Belmont this season.  Less than a head separated the first five home in the TABtouch-Westspeed Platinum Hcp (1600m).

“He was steaming home but photo-finishes haven’t been kind to me,” Maley said.  “It was a magnificent ride by Chris (Parnham).  This horse has plenty of ability and doesn’t over-extend so it’s important to keep his mind on the job.

“He’s a great chaser but you can’t get to the front too early.  He’s backed-up three weeks in a row and you would never know he had gone around the next morning.”

Arnie’s Boy is a three-quarter brother to Get Square (G3 Norman Robinson Hcp).  Their dam Let’s Get Even (Thunder Gulch) was bred by Brereton C. Jones at Airdrie Stud in Kentucky and she foaled seven winners after being imported to Australia in 2001.

Patronize (Redoute’s Choice) maintains an outstanding strike-rate of 72% winners-to-runners and among them is Maley’s seven-time winner Skinnen Tins who was retired for broodmare duties earlier this year after a barrier mishap at Pinjarra.

Maley’s Belmont double sent his 2021-22 tally to 31 wins.  He’s equal with David Harrison and they one behind 10th-placed Sean & Jake Casey.