Gingerbread Man is suitably-armed for a break-out season following a welter of winners at the back-end of 2021-22.

The Yarradale Stud resident sired the winners of 47 races last season and that career-best haul was made possible by the inclusion of 7 wins in July.

Gingerbread Man commenced the current season with Phanta, his sister Ginger Flyer and Mr Mt Walker filling out a winning treble at Belmont on Saturday and the siblings will both be given the chance at black-type level by their connections.

Phanta completed a hat-trick of his own for Gangemi Thoroughbreds with a front-running victory in the Congrats Laqdar Ramoly Hcp (1400m).  He will be given a black-type test in the LR Farnley Stakes (1400m) at Belmont on September 10.

“He’s unbeaten this prep and is just a tough, consistent horse,” co-trainer Chris Gangemi said.  “He got a few cheap sectionals today and got rolling at the 600m for Brandon (Louis) who has been riding him extra well.

“We’ve ruled out a Goldfields trip for the (LR) Hannans Hcp because the track will probably be too firm for him up there.  The Farnley should suit and we will get a better guide after his next start in a Rating 84 race in a couple of weeks.”

Phanta was originally with Justin Warwick after graduating from the Scenic Lodge draft for $5,000 at the 2019 Perth Magic Millions.  He’s a full-brother to Ginger Flyer and their dam Dubi Dubi Do (Dubai Destination) descends from G1 VRC Sires’ Produce Stakes winner Not Related (Family Ties). 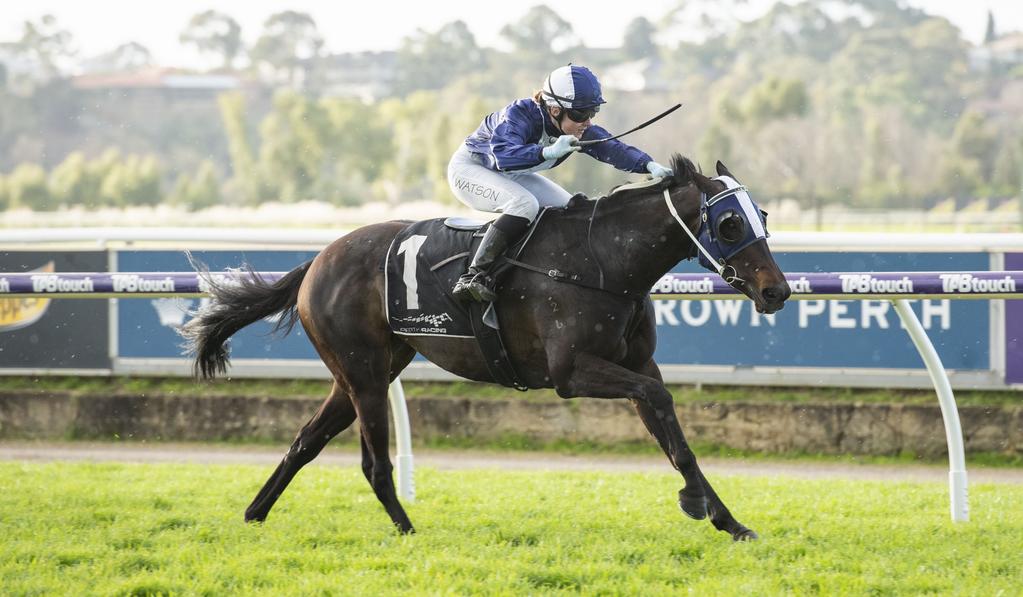 Ginger Flyer (Photo / Western Racepix) backed-up for a Belmont double despite a rise in grade and a slow start on Saturday.  She surged past Savage One in the straight for a one-length victory in the $100,000 Jockey Celebration Day Hcp (1400m).

Trainer Simon Miller was impressed with the way she put her rivals away on July 30 and went ahead with the seven-day break between runs.  “She’s always been good but has been a surprise-packet this prep,” Miller told The West Australian Newspaper.

“She’s only small and is always lumping big weights so I thought, while she’s in form, why not get down in the weights in a stronger race.”

Bred by Neil Cayley and James Pritchard, Ginger Flyer has won 7 races from 24 starts and earned $271,380 for a family partnership managed by Vicki Cayley.

Trainer Steve Wolfe has been a successful supporter of Gingerbread Man and his latest winner Mr Mt Walker has now banked over $150,000 in prizemoney following the Congrats Adam Durrant Hcp (1600m) on Saturday.

Wolfe has prepared the winners of 16 races by Gingerbread Man with flag-bearer Red Can Man a millionaire following 8 wins to Group 3 level in Melbourne and Perth.

Mr Mt Walker isn’t in that class, however, Wolfe rates him a genuine type who makes the most of his ability.  “He’s been a good horse for the stable and Shooter (McGruddy) gave him a gun run today.  Fingers-crossed, he can pinch a few more races on these soft tracks.”

Tom Waldeck of Claymore Investments bred him by putting Gingerbread Man over Find the Time (Blackfriars) who is closely related to recent Belmont 2yo winner It’s All A Rumour (I’m All The Talk).  Offered by Yarradale Stud (as agent) at the 2018 Perth Magic Millions, he made $24,000 to the bid of Commercial Bloodstock’s Noel Carter.

Hoofnote:  Red Can Man will fly to Melbourne next week for a spring campaign that will kick-off in the G3 Heath Stakes (1100m) at Caulfield on August 27.