Westriver Miracle won for the third time in four starts for Pearce Racing at Belmont on Saturday and he also completed a very successful week for his sire All American and Geisel Park.

Raced by Great Southern couple Ted and Bev Hill (Photo / Western Racepix), Westriver Miracle has 50% strike-rate from 10 starts after a head-bobbing victory over No Apology (Declaration of War) in the Free Entry To Belmont Hcp (1600m). 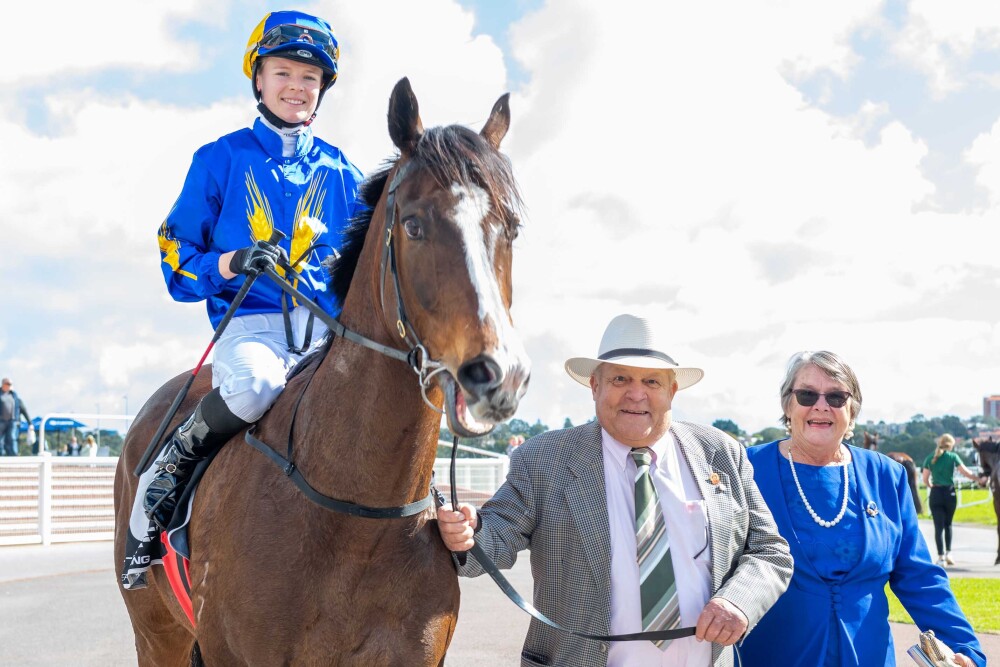 “He’s been going super since coming to us.  You can’t do much better than three from four,” co-trainer Ben Pearce said.  “He did it well today.  They went steady in front and the leader was always going to be hard to run down.

“I think he might be a Coolgardie Cup horse but will have to convince the owners first!”  The $100,000 Coolgardie Cup (1760m) will be run at Kalgoorlie on Sunday, September 4.

Westriver Miracle was bred by Geisel Park manager Conor Dunlop and his partner Rachel Skinner from Soliloquy (Trade Fair).  The mare’s unraced 3yo colt Who Be Whatee and 2yo filly Hoodwinker are both by former Geisel Park sire Vert De Grece (Ire).  Soliloquy has a yearling filly by All American and was covered by him again last October.

All American’s Group 1 Champion Yankee Rose created more headlines in Japan last Saturday when her 2yo daughter Liberty Island won on debut over 1600m at Niigata.  She scored by three lengths after clocking the final 600m in a stunning 31.4 seconds.  That sectional is believed to be a JRA record.

Liberty Island (Duramente) is trained by Mitsumasa Nakauchida for Sunday Racing’s Katsumi Yoshida who bought Yankee Rose privately off a Darby Racing syndicate in 2016.  She is the second foal and second winner for Yankee Rose following Romneya (Deep Impact) who claimed a Nakayama nursery last September.

Yankee Rose’s third foal is a yearling colt by Lord Kanaloa that made ¥370m (AUD 4.49 million) at the JRHA Select Foal Sale in July 2021.  He was purchased by Danox Ltd software executive Masahiro Noda and the knock-down price was the highest-ever paid for a foal or a yearling out of an Australian-bred mare at the JRHA Sale.

Liberty Island was a hard act to follow but Geisel Park-bred mare Icecrusher wouldn’t be denied at Canterbury on Wednesday.  She thundered home from six lengths off the lead deep in the straight to win the Schweppes Hcp (1580m) by a nose from Mystic Mermaid (Fastnet Rock).

“What a run!  She just went bang,” Hawkesbury trainer Brad Widdup exclaimed.  “You won’t find a mare that has the desire and a will to win like her.”

Icecrusher is now an 8yo and is one of the most widely-travelled racemares in Australia.  Geisel Park owner Eddie Rigg bred her by using former Yarradale Stud shuttler Frost Giant (USA) over NZ-bred mare Lady Jeumont (Montjeu).  The dam’s only other named foal was Adam Durrant’s Northam winner Our Mate Charlie (Myboycharlie).

Icecrusher was purchased as a foal by Michael Grant (G&G Bloodstock) and won at Bunbury and Ascot for Dan Morton before crossing the Nullabor via an unsuccessful 10-start stint in Kalgoorlie.

Arriving in South Australia in 2020, she won 7 times in 18 starts while with Strathalbyn-based Shayne Cahill.  “She’s tough and is such an honest little rocket,” Cahill said after her final win for the dual-licenced horseman at Morphettville in June 2021.  “She knows her job and loves racing.”