Universal Flair stood out like a beacon with a dominant victory in driving rain at Belmont on Wednesday.

The daughter of Scenic Lodge sire Universal Ruler (Photo / Western Racepix) blitzed a 3yo field by seven lengths in the Peninsula Dining Room Hcp (1200m).  The conditions didn’t pose a problem for the Ted Martinovich-trained filly as skimmed over the Heavy 10 surface while the others were labouring. 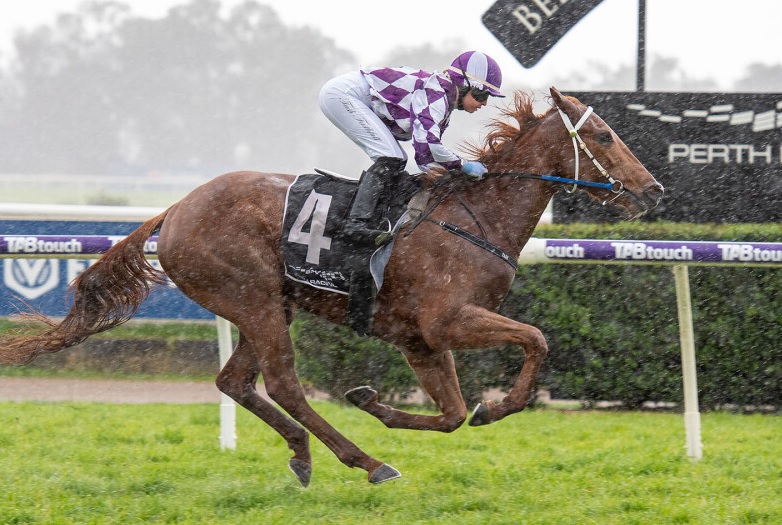 “We expected her to win but not by that much,” stable foreman Tommy Smith said.  “She has shown ability and done everything properly all her life.”

Universal Flair (3f Universal Ruler – Formula by Blackfriars) had flashed potential in her first two starts in March when finishing fifth in the LR Supremacy Stakes and sixth in the G3 Gimcrack Stakes – both times behind Champion WA 2YO Amelia’s Jewel.

Smith explained there were excuses when she was beaten by Invincible Ruby (Demerit) first-up at Belmont earlier this month.  “She slipped at the start and didn’t know how to go past them.  I told Tash (Fathfull) not to hold back today and she ran right up to her best.  All the Universal Rulers we’ve trained have handled wet tracks.”

Fathfull said it was pleasing to see Universal Flair finally make the breakthrough.  “She’s super-quick and it’s hard to keep up when she’s on fire at home.  It’s a relief to see her bring to the races what she does at trackwork.”

Universal Flair carries the Universal Ruler – Blackfriars cross which has produced 20 individual winners at a 66% strike-rate.  She also sports the purple and white silks of owner Stan Quinlivan who has raced horses with Martinovich for decades.

Universal Flair is a half-sister to Pinjarra winner Mussa (War Chant) and an All American 2yo filly named Tribute.  Her latest cover was to Nicconi last November.