Surprise win by No Surrender

Blackfriars stole the headlines with a 12th WA Sires’ Premiership in 2021-22 ahead of a Top 10 field that included current Scenic Lodge residents Snippetson and Universal Ruler.

A Top 10 finish wasn’t unexpected for Universal Ruler.  It was his fifth in a row, however, the venue for his 41st and final winner of the season was a surprise.

It came at Bendigo last Sunday when No Surrender landed Victoria’s last race for 2021-22.  The former Darren McAuliffe-trained gelding had transferred from WA earlier this year and had been collared late when runner-up in his previous two starts at Geelong and Moe. 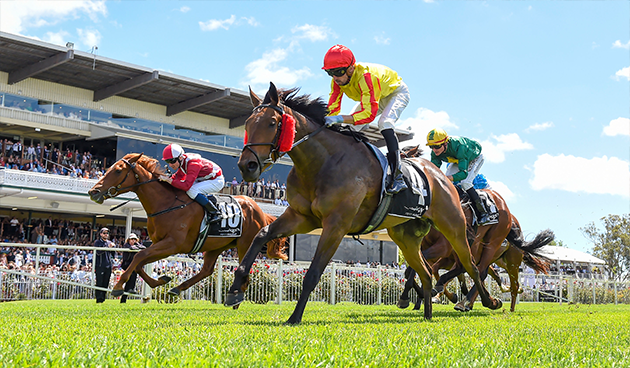 No Surrender (Photo: Western Racepix) is now prepared by Jack Laing at Cranbourne after changing hands for $40,000 at the Inglis December 2021 Online Sale.  He had won four races up to 1600m at Ascot but attitude problems had thwarted his progress in WA.

“He bounced out and controlled the race,” jockey Arron Lynch reported after the Big Screen Company Hcp (1400m).  “He’s been around the mark and got his own way in front.  He gave me a good kick and was good enough and tough enough to win.”

Jack Laing has the pedigree to get the best out of No Surrender.  His grandfather Eddie and father Robbie are both Group 1 winning trainers.

No Surrender is the final foal of Dark Attack (Dylan Thomas) who was bred by Peters Investments.  She retired a maiden but her half-brother Cohort (Scenic) completed a stakes winning double in the 2008 Belmont Guineas and Belmont Classic.  She is also a half-sister to the dams of Dark Choice (G3 WA Oaks) and Churchill Dancer (G2 VRC Bobbie Lewis Hcp).

Universal Ruler’s leading earner last season was the McAuliffe-trained mare The Velvet Queen who banked $216,380 from three wins and five placings in 10 starts.