Willaview Park has been in the frame this month with 3yo winners Costume Party and Saintorio and they could notch a running double for the Narrikup nursery at Belmont Park this Saturday.

Costume Party came from last to snatch a last-stride victory when racing first-up in the Amelia Park Hcp (1000m) at Belmont on September 14.  She went out a $3 favourite and trainer Luke Fernie wasn’t unduly concerned when she was giving the leaders such a big start in the straight.

“There were a few with a bit of toe and that set it up for her,” Fernie explained.  “We came here instead of trialling when it looked like the field would fall away.  She started her last prep the same way and will definitely keep improving.”

Costume Party is a first-crop daughter of Willaview sire A Lot (USA) and is a younger half-sister to Bragwell (I’m All The Talk) who has won twice at Ascot for trainer Steve Wolfe.  Their dam Princess Hallowell (Oratorio) foaled a Maschino colt for Willaview Park’s Claire Williamson last month.

Fernie has thrown Costume Party in at deep end this Saturday against the boys – Swear To God, Just Go and El Patron – nevertheless, she’s up to the task befitting a filly who was placed behind Champion WA 2YO Amelia’s Jewel in the LR Supremacy and G3 Gimcrack last season.

A Lot is a son of Champion USA stallion Tapit (USA) and his second crop has already thrown up another likely early-comer in A Lot Of Good Men.  The Trevor Andrews-trained 2yo colt won a Belmont barrier trial last Monday and he’s bred to be good as a younger half-brother to last-start Belmont winner Bustler (Playing God).

Their dam Cosmah Domination (Oratorio) is a winning half-sister to Amelia Storm (WATC Country Cup) and, like Princess Hallowell, she foaled a Maschino (filly) in August. 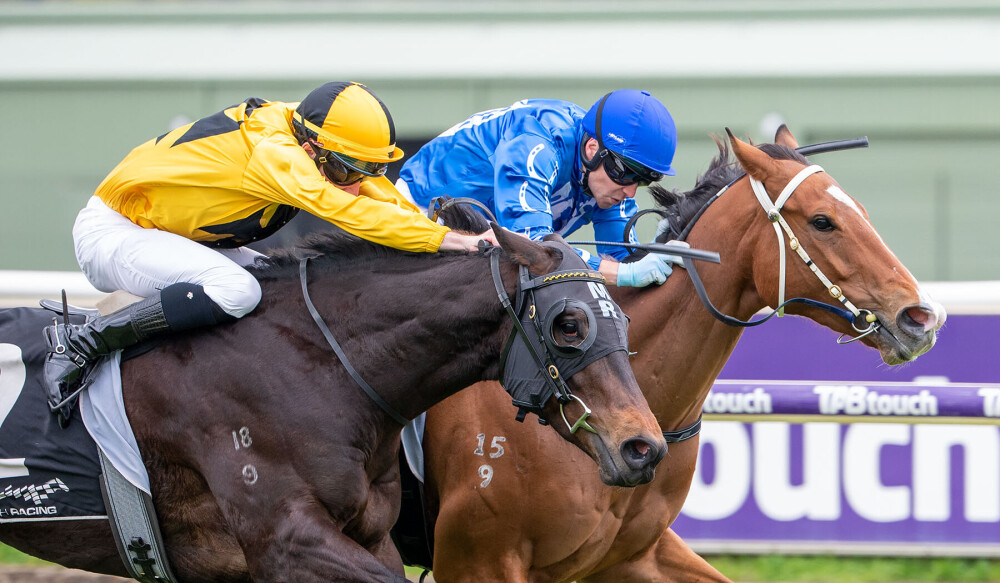 Saintorio (Oratorio) is also facing a much stronger field than his win at Belmont last Saturday, September 17. Kosta’s Love is a short-priced favourite in pre-post markets and Lord Gannicus also possesses untapped talent.

Saintorio was catalogued among the Willaview consignment (as agent) to the 2021 Perth Magic Million in the Swan Valley but was retained by trainer Stephen Miller when bidding failed to reach his reserve.

Brotherly love didn’t stop Brad and Chris Parnham riding hell-for-leather when they settled down to fight out the Free Entry To Belmont Park Plate (1300m) on Saturday.

It developed into a two-horse race after Brad (Saintorio) crossed the field to lead while Chris (Saloon Bar) stalked the front-runner every inch of the way.  They dropped the others and there was no quarter asked or given in the straight.

On-course announcer Darren McAullay summed it up with a graphic call of the closing stages.  “Saintorio is fighting for Brad Parham.  Little brother Chris is trying to get the best out of Saloon Bar.  They’re brushing leather as they go to the line and Saintorio has just clung on in what was a bustling finish.”

Chris lodged a protest and stewards agreed Brad’s mount had shifted ground but could not be satisfied that Saloon Bar would have beaten Saintorio had the interference not occurred.  They dismissed the objection but reprimanded Brad for careless riding and admonished Saloon Bar’s trainer Dan Morton for his comments when leaving the inquiry.

It was a lively start to a competitive day’s racing and confirmed Brad and Chris are currently two of the best jockeys currently riding in the west.