Winner of the Week – All Show 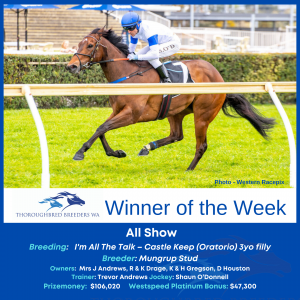 Trainer Trevor Andrews unveiled a filly with immense potential when he unleashed All Show at Belmont on Saturday.

The 3yo daughter of I’m All The Talk was pitched in against some talented opposition first-up since April but made them look second-rate in a 3yo sprint over 1000m.

“She’s an exciting filly and that was an easy win,” Andrews said.  “We went in thinking she might sit three pairs back on the fence but she flew the gates and led them easily.  She was always travelling and Shaun (O’Donnell) had handfuls of horse into the straight.

“She’s not overly big but has matured into a super strong filly.  Her work has been outstanding since coming back from a spell and not many horses can match what she shows us on Equimetre.”

That program means she will surely bump into Amelia’s Jewel sooner rather than later but there’s no dodging the Simon Miller-trained Champion WA 2YO.  “Take nothing away from Amelia’s Jewel,” Andrews said.  “She’s pretty special but I’m sure our filly will be competitive.”

All Show had flown home from last for an ‘awesome’ second to Snowdome on debut in April according to O’Donnell.  “Kesh Dhurun was on her back then but I let her slide today and she relaxed in front.  I said ‘giddy-up’ at the furlong and it was all over.  She’s still learning and I’m happy to stay on her.”

Purchased by Andrews for $25,000 as a new-season yearling at the Mungrup Stud Dispersal Sale in August 2020, she is by I’m All The Talk (Stratum) who died in January 2022.  Her dam Castle Keep (Oratorio) is a winning half-sister to Lord’s Ransom (G2 Perth Cup) and Palace Intruder (LR Aquanita Stakes).

The I’m All The Talk – Oratorio cross has a 100% strike-rate from 10 individual starters headed by G2 WA Guineas winner Watch Me Dance.

Castle Keep was purchased for $16,000 by Mogumber Park at the Mungrup Stud Dispersal.  She was carrying a colt by Playing God that made $110,000 when purchased by Andrews at the 2022 Magic Millions Yearling Sale.  He was offered by Ridgeport Holdings (as agent) and has been named All Play.  Ridgeport’s Santo Guagliardo kept a share and will race him with some of the same owners in All Show.

Mungrup Stud-bred graduates completed a city-winning treble on Saturday.  All Show was joined by Defending (Oratorio) at Belmont and Daring Move (I’m All The Talk) at Morphettville.