The winners kept coming for Oakland Park stallion Sessions when Pepper Assault broke through in town on Wednesday.

The Holly Taylor-trained mare hadn’t saluted the judge since opening her career with a running double at Northam in July 2021.  Known as ‘Pepper’ at home, she was on a seven-day turnaround at Belmont and finished over the top of heavily-backed favourite Never Sober (Sooboog) in the closing stages of the Ascend Trophies Hcp (1650m).

“She has always shown ability but it’s been a long time between drinks,” Taylor said.  “She came through last week’s run really well and we decided to go again.  Holly (Watson) placed her nicely in the run and getting over a mile helped her let down so well in the straight.” 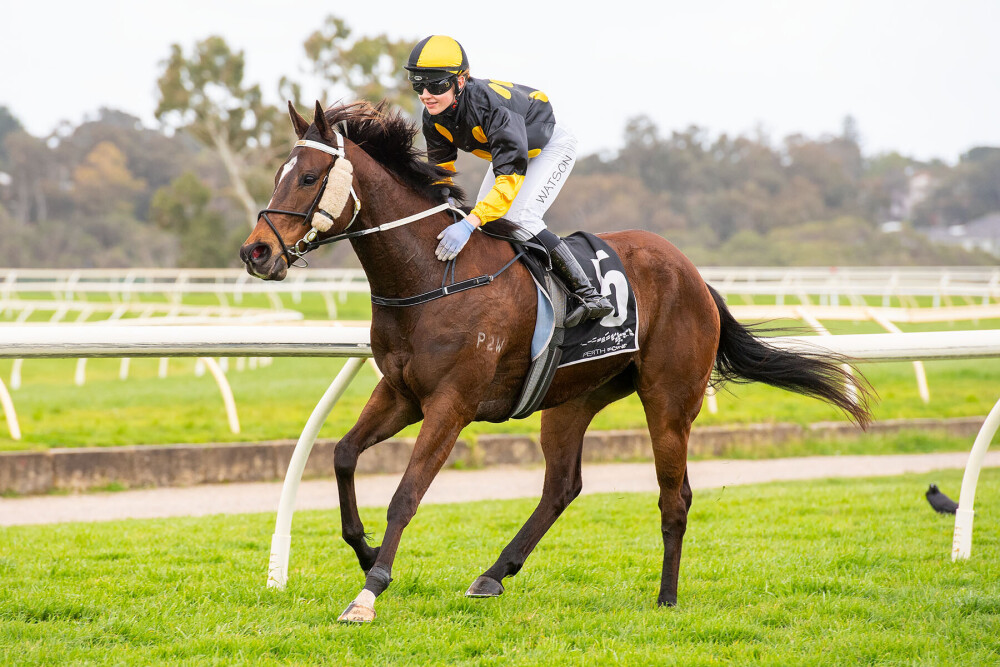 Pepper Assault’s (Photo / Western Racepix) return to form was all the more remarkable considering she sustained life-threatening injuries as an unraced filly.  “She rolled through a fence and severed an artery,” Taylor recalled.  “She lost a lot of blood and was at the vets for a while with infections and bone problems.”

She is the third winner from as many foals out of Columberdine Girl (Charge Forward) who has a 2yo filly and a yearling filly by Sessions.

Sessions has sired 10 individual winners this season for earnings of $405,403.  There have been five in the last week starting with Sessions Peak at Belmont on Wednesday before he doubled up with Sesswa and Anna’s Boy at Northam on Thursday.

His consistent sprinter Comes A Time landed the Nicopolis Stakes (1200m) for owner-breeder Craig Fox at Belmont on Saturday and trainer Michael Grantham will back him up in this Saturday’s LR Black Heart Bart Stakes (1200m).

In Melbourne, Sessions mare The Front Bar will launch her spring campaign in the Ladbrokes 55 Second Challenge (955m) at Moonee Valley on Friday night.  The former Oakland Park homebred now races for a syndicate managed by Seymour Bloodstock’s Darren Thomas.

The Front Bar won five times in six starts during a purple-patch in Perth last year.  She was last seen finishing a half-length second to Miss Conteki in the LR Summer Scorcher (1000m) at Ascot on New Year’s Day.

“She is an exciting mare and its great to have her in the stable,” co-trainer Tony McEvoy said.  “Her 1000-metre form is fabulous but she’s still down in the ratings so it gives us plenty of options.  It’s a long spring so there’s no rush but I’m sure she will figure at some stage.”

Sessions (Lonhro) stands for $11,000 at Oakland Park alongside WA newcomer Shooting To Win (Northern Meteor) who is priced at $9,900.  Service fees (inc GST).