Thanks be to God: A horse for the Perth Cup

Trainer Daniel O’Connor went out on a limb labelling Gratias Deo a feature horse of the future after his victory in the TABtouch Maiden (1200m) at Belmont last Wednesday.

The lightly-raced gelding led home a quinella for Rivercrest Park sire God Has Spoken when getting the better of Storm Lord first-up since last December.  He drifted from $4.60 to $7.50 and O’Connor’s concerns about being held up in traffic were only alleviated when Brad Rawiller angled off the fence in the straight. 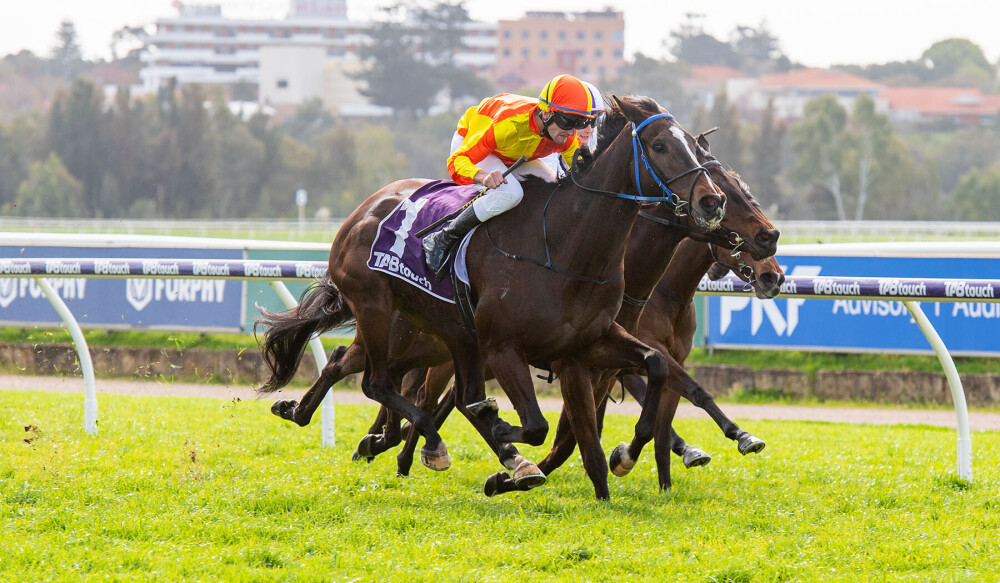 Gratias Deo (Photo / Western Racepix) ran five minors in a half-dozen outings during his previous prep and had signed off with a half-length second to Constant Dreaming (Blackfriars) who progressed to Listed wins in the 1000 Guineas (1800m) and Natasha Stakes (2200m) at Ascot.

“We’ve always thought he could make a Perth Cup horse,” O’Connor declared as Rawiller brought the winner back to scale.

“He’s had feet issues and the long spell has done him the world of good.  He’s a big unit and has trimmed down from 590kg to 560kg since coming back into work.

Bred by Rivercrest Park owner Steve Hoare, Gratias Deo is the penultimate foal from Last Reply (Euclase) who won twice in town and was also placed behind Keyton Grace in a Winter Championship Final at Belmont.  Her final foal is an unraced Safeguard 3yo named Big Noter.

God Has Spoken (Blackfriars) stands for $2,200 at Rivercrest Park alongside Ducimus (Snitzel) at $4,400.  Both fees (inc GST) and are payable on a live foal.