A Westspeed Platinum bonus won by Swear to God on Saturday has increased Playing God’s lead at the top of WA Sires’ premiership.

Tuesday’s updated TBWA Sires’ ladder had Playing God ($758,697) topping the table prior to a $40,700 bonus being added by Arion Pedigrees. 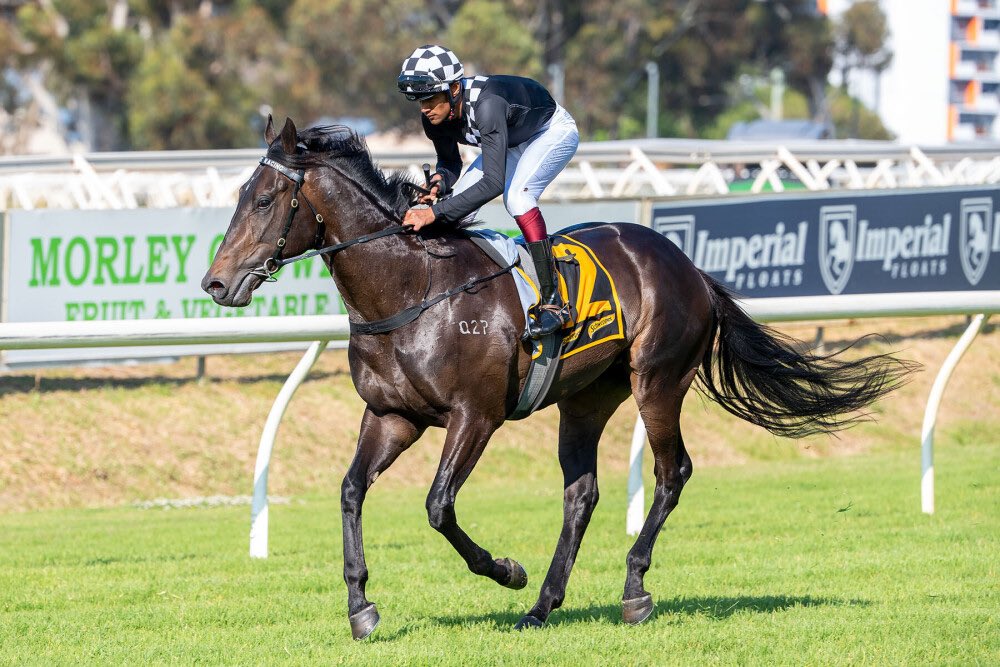 Swear to God (Photo / Western Racepix) is one of several Playing Gods heading to 3yo black-type ranks following a gutsy victory in the Ballpoint Construction Hcp (1200m) at Ascot.  Racing second-up from a winter spell, he jumped straight into the bridle before giving up the lead to longshot Pym’s Royale.

Starting an odds-on favourite against older horses, he was sitting pretty and poised to pounce at the top of the straight for Laqdar Ramoly.  Eased off heels into clear running, he knuckled down and maintained a margin to prevail by a head over Written Matter (Written Tycoon).

“He’s starting to fulfil his potential – Written Matter is a very good animal but he got the job done,” part-owner and trainer Russell Stewart said.  “He’s already looking for 1400m in the (LR) Fairetha Stakes in three weeks.

Swear To God (3c Playing God – Ora Miss by Oratorio) won twice in three starts at Ascot in the autumn for a syndicate managed by Stewart’s wife Antonella.  His only loss was a placing behind Snowdome and All Show in April.

“He’s going to be an even better 3yo in the autumn and we might take him away,” Stewart added.  “Hopefully, he lives up to expectations.  I think our current 3yo crop can go east and smash them over there.”

Playing God’s 3yo filly Baby Paris is ready to resume racing for trainer Colin Webster.  Her only loss in a four-start juvenile campaign was a second to Amelia’s Jewel in the G2 Karrakatta Plate (1200m).

Neville Parnham has Playing God 2yo winner Sky Duke racing first-up on Wednesday as a short-priced favourite for the Quayclean Hcp (1000m).  His Playing God stablemate Bustler had been nominated for the LR Belgravia Stakes (1200m) this Saturday

Playing God’s unbeaten 3yo Paddy’s Lad was being set for the G2 WA Guineas by trainer Dan Morton but he’s been sidelined by a knee injury that required minor surgery.