Gold Front stallion Awesome Rock kept the winners ticking over at Northam on Thursday ahead of Group 1 campaigns for his 4yo mare Searchin’ Roc’s and 3yo gelding Red Sun Sensation.

The Jim Taylor-prepared Zadar Rock scored a front-running victory in the Country Wide Insurance Hcp (1600m) at Northam following wins at Belmont and Pinjarra last season.  He was bred and sold by Gold Front for $36,000 at the 2020 Perth Magic Millions. 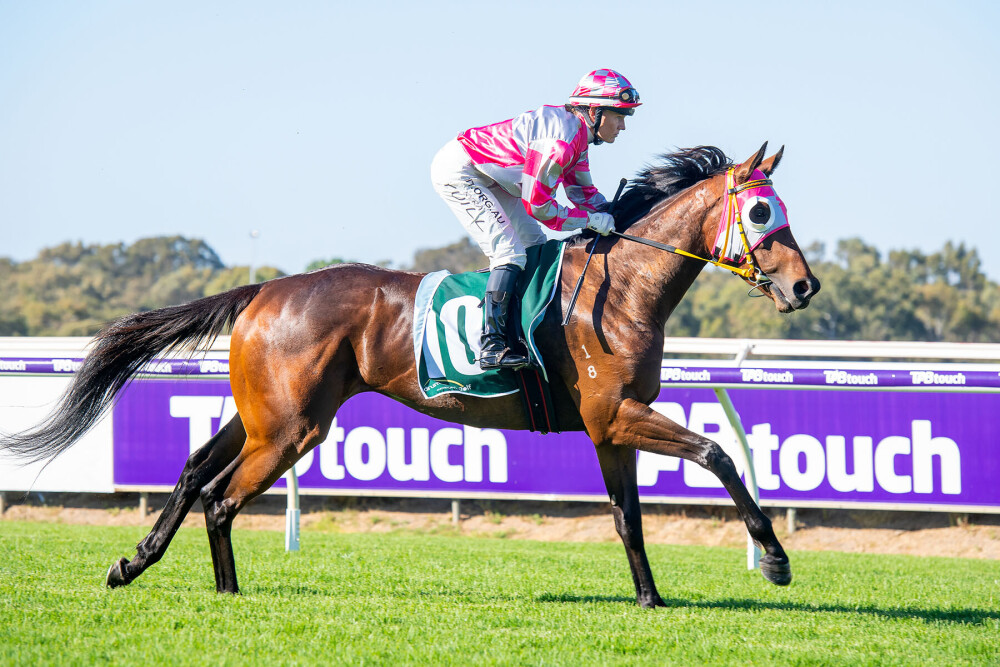 Taylor has also taken over training Awesome Rock star Searchin’ Roc’s (Photo / Western Racepix) and is confident the $672k earner has finally mended her barrier manners.  She entered the gates with no problems at the Belmont trials on Monday and won the 1000m hit-out eased down by Kyra Yuill in 61.05s.

“We tried the blindfold and she was good,” Taylor said.  “The starter and a couple of the barrier attendants said she was beautiful.  She hit the front by a couple of lengths and then just waited for them.”

Taylor and owner-breeders Rob and Heather Grant also have the G1 Railway Stakes (1600m) on the radar next month.  Class mares Elite Belle, Galaxy Star and Inspirational Girl have been Railway winners in recent years for Peters Investments.

In Melbourne, Awesome Rock’s promising stayer Red Sun Sensation will attempt to turn the tables on Mr Maestro (NZ) in the G3 Caulfield Classic (2000m) on Saturday.  He was runner-up to the Kiwi-bred galloper last time out in the LR Super Impose Stakes (1800m) at Flemington.

“He was very raw at the start of this season and I’ve been hedging my bets and spacing his runs making sure he’s mature enough for the (G1) Victoria Derby,” trainer Peter Moody said.  “He’s a nice horse and has just needed a bit of time.”

Their dam Society Gal (Faltaat) is an unraced sister to G1 Hong Kong Champions Mile winner Sight Winner.  She has a 2yo colt by Awesome Rock with trainer Jason Miller and foaled another colt by him in August.