Winner of the Week – Secret Identity 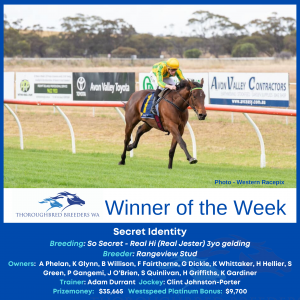 Hidden among numerous new winners last week was a 3yo gelding named Secret Identity who is thriving in his initial campaign for trainer Adam Durrant.

Secret Identity started a $1.26 favourite in the Hahn Superdry Maiden (1600m) at Northam and the only surprise out of the race was that it took him eight starts to greet the judge.  The quality of the opposition could be called into question but you can’t do much more than score by four.

“There was no shortage of happy faces after he put up a comfortable margin,” Durrant Racing reported.  “He’s a ripening 3yo and was given a peach of a ride by CJP (Clint Johnston-Porter).”

Rangeview Stud sold him for $40,000 at the 2021 Perth Magic Millions to a syndicate managed by Perth Cup-winning owner Andy Phelan.  He had been placed at his previous five starts during September and October in the Avon Valley.

Secret Identity is a son of Rangeview stalwart So Secret (Danetime) who is currently covering his 13th book for owners Robbie and Jody Gray.  Longevity is a hallmark of the Rangeview roster – Key Business (Success Express) served for 18 seasons before the Grays moved from Bullsbrook to Burekup.

Real Hi has a yearling filly from the first crop of Rangeview Stud sire Long Leaf (Fastnet Rock) who won a LR Blue Diamond Preview at two and a LR Karaka Mile at three.