Universal Playboy – Winner of the Week 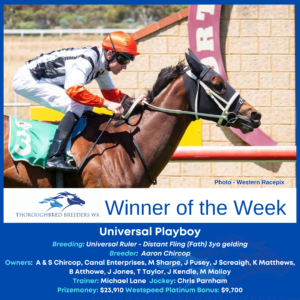 Scenic Lodge stallion Universal Ruler maintains a Top 10 spot on the WA premiership after a week that saw him sire a promising maiden winner at Northam and bank another bonus courtesy of Westspeed at Ascot.

Universal Playboy is the latest TBWA Winner of the Week following an all-the-way victory in the Western Racepix Maiden (1100m) in the Avon Valley on Thursday.  Then it was the turn of The Velvet Queen who earned $64,190 – over $20,000 of it from the Westspeed Platinum Scheme – for flying late to land the Drummond Golf Hcp (1400m) on Saturday.

Universal Playboy had won two Lark Hill trials in October and was in the market for a return to racing at Ascot on November 5.  After jumping to lead a slick field that included My Bella Mae, he lay outwards in running and gave ground quickly before returning an elevated heart rate.

Trainer Michael Lane subsequently advised stewards the 3yo gelding had recovered well and he was of the opinion the performance was due to inexperience.  On the strength of Thursday’s win, his recuperation was exceptional and so were his racing manners.

Similar improvement going forward will see him heading to town for Lane’s in-form stable from Boyanup.

Universal Ruler’s 4yo mare The Velvet Queen cut down her rivals with a terrific first-up performance for Impressive Racing’s Darren McAuliffe on Saturday.  This time last year, she started a 3yo campaign with wins at Ascot and Belmont and closed the season winning over a mile at Belmont.

McAuliffe believes she has a bright future.  “I’ve always held her in very high regard,” he said after that first prep.  “She would have run in last year’s WA Guineas if we had more time to get her ready.  She should get out to 2000m and has got some real weapons.”

The Velvet Queen is a full sister to Impressive Racing’s The Velvet King who won 8 races and over $900,000 to Group 3 level in the 2019 Northerly Stakes and 2021 Belmont Sprint.