Amelia’s Jewel has kept the winning purse from the Group 1 Northerly Stakes (1800m) in Western Australia after seeing off a strong raiding party of imported gallopers at Ascot.

The French-conceived but Vasse-owned 3yo filly earned $830,000 for her breeder Peter Walsh with a convincing one-length victory over Ironclad (GB), Steinem (GB) and Cascadian (GB) on Saturday.  Best of the local brigade among the beaten division was fifth-placed Bustler (Playing God). 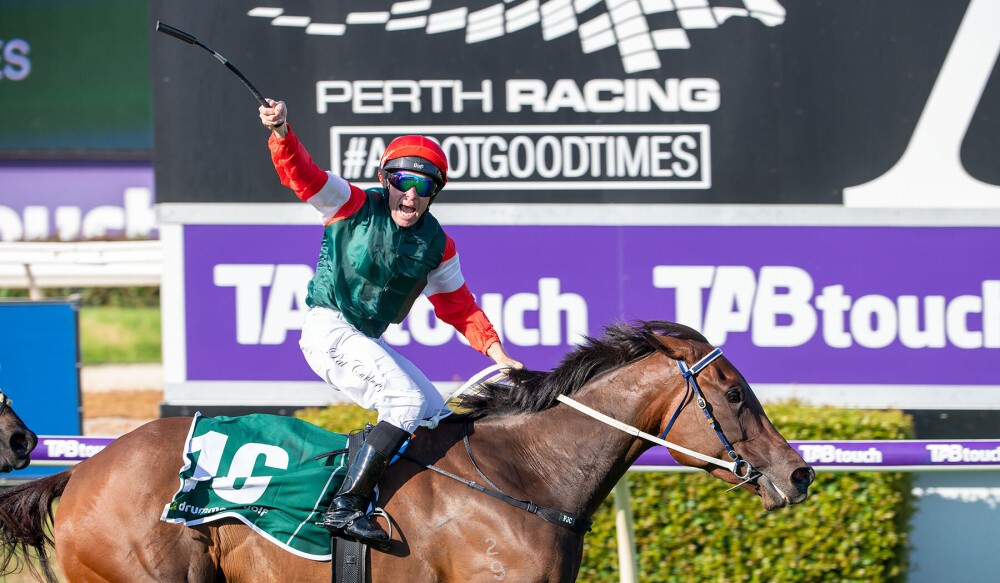 Amelia’s Jewel (3f Siyouni – Bumbasina by Canford Cliffs) is a lay-down misère for the WA 2022-23 Horse of the Year Award and her connections will now look with confidence to the Eastern States.

Arcadia Queen (Pierro) was the last WA Guineas winner to double up in Perth’s weight-for-age classic and Amelia’s Jewel appears every bit as good as the Peters Investments filly who went on to win twice at Group 1 level in Melbourne.

“She‘s got an unbelievable engine with a huge stride and a brain,” trainer Simon Miller said.  “Her gallop on Tuesday was superb so I knew we had her on track.”

Amelia’s Jewel (Photo / Western Racepix) started a $2.80 favourite from the inside gate and was always travelling like a winner for Patrick Carbery.  “She settled so well and then quickened through a pretty tight gap for me in the straight.  We’ve never doubted her but this is unbelievable.”

Amelia Park’s Peter Walsh admitted the Northerly may have been her swansong in Perth.  “I‘ve waited 50 years to win a Group 1 and now there’s nothing else left for her here.  We love her and it feels so surreal.”

An Eastern States campaign would include the $5 million All-Star Mile at Moonee Valley on March 18 and a likely spring target would be the $10 million Golden Eagle at Rosehill.  Meanwhile, Walsh can expect an earlier bonus on January 13 when he sells Amelia’s Jewel’s yearling half-brother by Darley sire Blue Point (Lot 690) at the Gold Coast Magic Millions Sale.