Leading Taddy (Photo / Western Racepix) crossed the field after a furlong and then extended that lead under Holly Watson in the Ocean Renovations Maiden (1200m).  His acceleration from the top of the straight propelled the winning margin to the best part of four lengths at the finish. 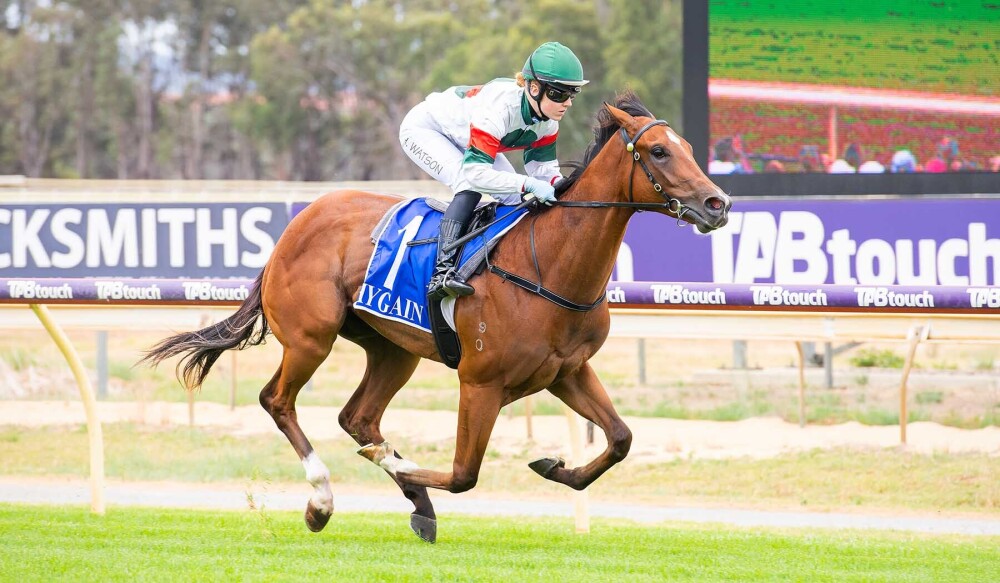 Bred by Gervase Park’s Chris Gales from Swimmer (Bernardini), he was a $65,000 buy for Ash Maley at the 2022 Perth Magic Millions.  The Lancelin trainer also prepares his Ascot-winning older half-brother Swim Through (Patronize).

“He put the race to bed a long way out and Ash said he will put him away for the Magic Millions 2YO Classic in February,” Rivercrest Park studmaster Steve Hoare reported.  “He was a standout as a yearling and looked readymade at the sales.

“He proved that yesterday and we’re delighted to see Ducimus off the mark at Christmas.”

Leading Taddy has earned $25,655 in prizemoney and Westspeed Platinum bonuses for a Maley-managed syndicate that includes many of the same owners in Swim Through.

Ducimus was bred in WA by Oakland Park and changed hands for a sale-topping $700,000 at the 2016 Inglis Melbourne Premier.  The Team Hawkes-trained colt booked a stud career as a 2yo black-type winning son of Snitzel in the Listed Talindert Stakes (1100m) at Flemington.

He stands at Rivercrest Park for Orbis Bloodstock and the early-season strike will put the spotlight on his second-crop yearlings at the 2023 Perth Magic Millions.

Rivercrest Park’s Ducimus yearlings will be presented by Alwyn Park (as agent) in the Swan Valley and among them are fillies from Angel Wing (Lot 51), Renegade Girl (Lot 171) and Pretty Cingin (Lot 312)

Alwyn Park studmaster John Andrew is also prepping a Ducimus colt out of his mare of Classical Snow (Lot 68).  The chestnut is a half-brother to Maschino’s LR Starstruck Classic winner Snowchino.