Brilliant 3yo Feels Playful looked a pro leading home a quinella for Playing God in the Own The Dream Maiden (1400m) at Ascot on Saturday.

The Mitch Pateman-trained 3yo accelerated like a black-type filly under Holly Watson to score by panels from Fashion Stakes who is also by the Champion Sire-elect of Western Australia.

Feels Playful (Photo / Western Racepix) set the tone for a successful TBWA Platinum Stakes Day.  Launched last year, it’s a perfect link from The Pinnacles to Perth Cup Day and prizemoney is also a factor with the seven Westspeed Platinum races worth $125,000 topped by Westspeed Bonuses. 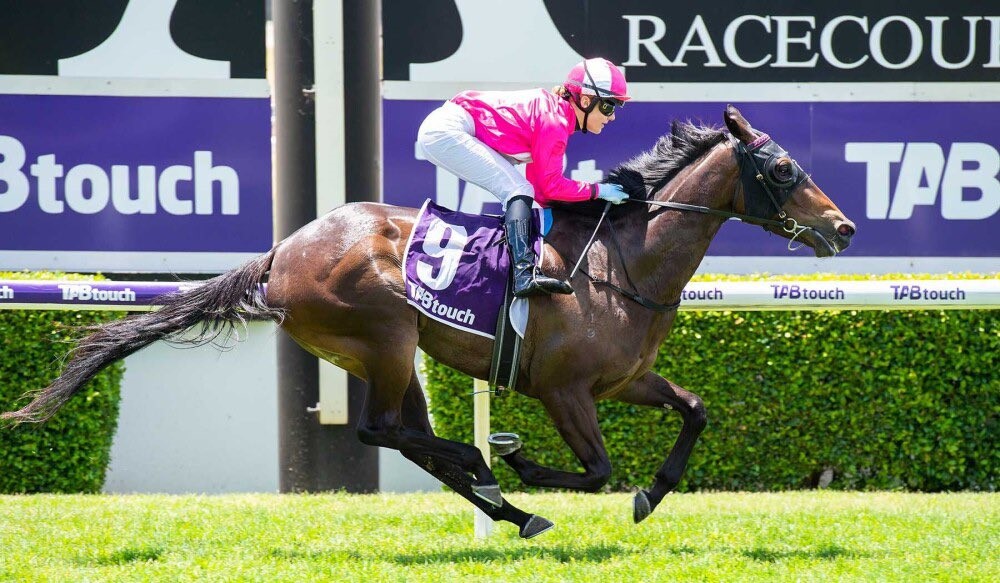 Pateman had been a bit disappointed when Feels Playful was nosed out by Rock My Way at Northam last month.  “Getting out to 1400m first-up was a concern,” he admitted.  “Then the winner came out and won again at Ascot so we were probably on the right track.”

Pateman gave all the credit to his uncle Paul Hunter who has been instrumental in her education and development.  “Getting beat at Northam ended up a blessing in disguise.  Paul rang up and said there was an Ascot Maiden coming up worth $50,000.

“All I had to do was keep her in one piece for three weeks.  And Holly took luck out of the equation with a top ride.”

Feels Playful was bred in the Great Southern by Dr Colin Davey who owns the Balgownie Equine Vet Clinic at King River.  Her dam Feels Like Spring (Dr Johnson) is an unraced daughter of Scenic Cruise (Scenic) who was an Ascot specialist for trainer Tom Little.

Playing God cracked another quinella in the Westspeed Platinum Sires Stakes (1200m) with another talented 3yo filly named Goddess Of Giving.  The Mungrup Stud homebred unleashed a late burst to grab Sky Duke (Playing God) and Revitup (Demerit) right on the line.

Goddess Of Giving had been placed in Pinjarra and Ascot nurseries during an autumn prep with Lou Luciani and she returned with a first-up second to Street Parade at Ascot a fortnight ago.  “She’s big and raw with enough talent to go a long way,” Luciani said.  “She was travelling well and I liked her at the 600m.

“She’s pretty special and will go through the classes.”  Luciani also mentioned a black-type target in the Listed WA Breeders Classic to be run at Pinjarra on Sunday, January 29

Goddess Of Giving is the final foal from She’s Roy’s Gift (Due Sasso).  That cross with Playing God has a 75% success-rate.  She’s Roy’s Gift is a younger half-sister Private Dancer (Oratorio) who won a LR Challenge Stakes for Trevor Andrews.

Saturday’s windfalls gave Playing God a significant advantage at the top of the WA sires’ premiership after the lead went back and forth with Trade Fair (GB) during The Pinnacles.  That success will be reflected at the Perth Magic Millions with a Sale-high 25 Playing God yearlings parading in the Swan Valley.

They are the first Playing Gods conceived at Darling View Thoroughbreds after transferring from Mungrup in September 2020.  At that stage, his only Stakes winners were Kay Cee and Lordhelpmerun and he was priced at a $13,200 fee.

Another former Mungrup stallion still making news is Oratorio (Stravinsky) with horses like Halatorion in the TBWA Stallion Tender Scheme Trophy (1200m).  Trained by Roy Rogers for a syndicate managed by breeder Wendy Rogers, he was ending a run of 14 outs on Saturday since a running double at Pinjarra and Albany in January.

Halatorion pounced on the leaders when Willie Pike released the brakes and they put more than three lengths on the favourite Bitofmerit (Demerit).  “He’s been stiff a few times,” Rogers said.  “There were no instructions for Willie except to make sure he didn’t miss the kick.  That was a really good win and the favourite is a good horse.”