Shell Bell – Winner of the Week 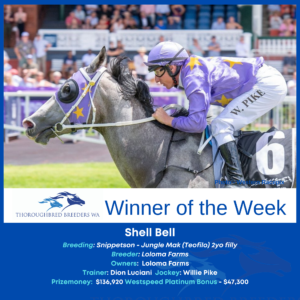 Trainer Dion Luciani was back in his element preparing early-season 2yo winner Shell Bell at Ascot on Saturday.

The Loloma Farms homebred started a short-priced favourite after weighing in at her first three starts and she was all the better for those outings when spacing her rivals under Willie Pike in the TBWA Westspeed Platinum Plate (1000m).

“We expected her to go that well,” stable rep Ian Glading said.  “Willie got to know her last start and he elected to lead again.  She keeps improving from her early days when she raced like the winning post was on the home turn!”

Shell Bell is by Scenic Lodge sire Snippetson and she earned $109,200 for her owners on Saturday which included $40,700 in Westspeed Platinum Bonuses.  TBWA also topped up Breeder Bonuses to $10,000 through funding from the Stallion Tender Scheme.

The grey filly brought up a century of 2yo wins by Snippetson on Saturday.  He has sired 76 individual 2yo winners of 100 juvenile races topped by Stakes winners My Poppette, Tinsnip, Gemma’s Son, Mystic Master (Sing) and Miss Upstart (NZ).

Her dam Jungle Mak (Teofilo) was an Ascot 2yo winner for Wally Mitchell in December 2013.  She was a $75,000 buy for John Chalmers (as agent) from Toreby Park at that year’s Perth Magic Millions.

Snippetson has 11 yearlings entered for 2023 Perth Magic Millions with 7 of them from his home-base.  There have been several updates since the catalogue was released including the Scenic Lodge colt from Key Business mare Timesin (Lot 27).  His older half-brother Henchard (Blackfriars) sent his career earnings past $200,000 last Wednesday week winning the Morley Growers Market Hcp (1800m) at Ascot.