Winner of the Week – Fearless Talk 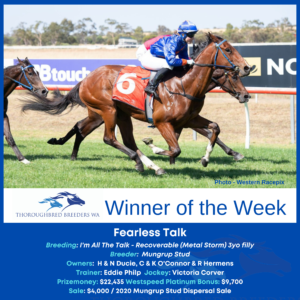 Ability alone was enough to propel promising 3yo Fearless Talk to a surprise victory in the Avon Valley Toyota Maiden (1300m) at Northam on Thursday.

Never a factor at $101 on debut at Northam last month, the daughter of I’m All The Talk was detached from the pack second-up and looked a longshot again despite tacking on to the field turning the home.

Fearless Talk worked into the race along the rails before Victoria Corver angled the big-framed but raw filly into clear running.  Still not fully-balanced, she set out after the favourite Salary Man (Maschino) and reeled him in with time to spare.

Fearless Talk is trained by Eddie Philp for a Howard Ducie-managed partnership after making $4,000 as a new-season yearling at the 2020 Mungrup Stud Dispersal Sale.  She’s a half-sister to four winners including G2 Belmont Guineas runner-up Accelarometer (McFlirt).

Their dam Recoverable (Metal Storm) didn’t get much of an opportunity to further her family’s page on the track in just five starts for trainer John Price.  Her half-sister Eastern Zone won a LR Jungle Dawn Classic and other Stakes-winning fillies a generation further back include Alabama Whirly (G1 Karrakatta Plate) and Joy Of The Jungle (LR Belgravia Stakes).

I’m All The Talk transferred from Mungrup to Darling View Thoroughbreds in 2020 and the Mundijong stud has catalogued its first crop by him for the 2023 Perth Magic Millions Yearling Sale.  The second and final crop have been arriving regularly since August 1 when Angel Of War (Declaration Of War) foaled a filly for Gervase Park breeder Chris Gales.

I’m All The Talk died in January after covering over 120 mares and his final homebred delivery has also met with a sad postscript.  Darling View mare Star Of Magic (Patronize) foaled a filly on October 30 but died five days later.

Darling View’s Brent Atwell thanks the industry for the phenomenal response to find a foster mare.  “There were 300-plus shares to our post and we really appreciate it.  A big thank-you to Misty Valley Thoroughbreds for helping us with a beautiful foster mare and also to the amazing team at Ascot Equine Vets.

“We are so grateful to everyone.  ‘Star’ is very special to us being the last foal to be born at Darling View by our late champion I’m All The Talk.”