Alwyn Park owner John Andrew received more kudos as the breeder of Buster Bash on Saturday and there could be a cash windfall when he offers the Perth Cup winner’s half-sister on Day 1 of the Perth Magic Millions.

Catalogued as Lot 80 on Thursday, February 23, the filly is by Gingerbread Man and she will be one of the Swan Valley stars on account of the longest-serving vendor in WA.

Their dam Disco Miss (Zeditave) was a bargain buy at $4,500 following the death of former TBWA committeeman Allan Young who operated Kintore Stud in Serpentine.  “I bought Disco Miss in 2014 and she has been a wonderful broodmare with 8 foals in 9 seasons,” Andrew said.  “She has a Jimmy Choux (NZ) colt on the ground and is back in foal to Awesome Rock.”

Andrew reports the yearling filly by Gingerbread Man is prepping really well and Buster Bash improved the pedigree with feature wins in the LR Luckygray Stakes (1800m) and LR Towton Cup (2200m) leading up to the G2 Perth Cup (2400m). 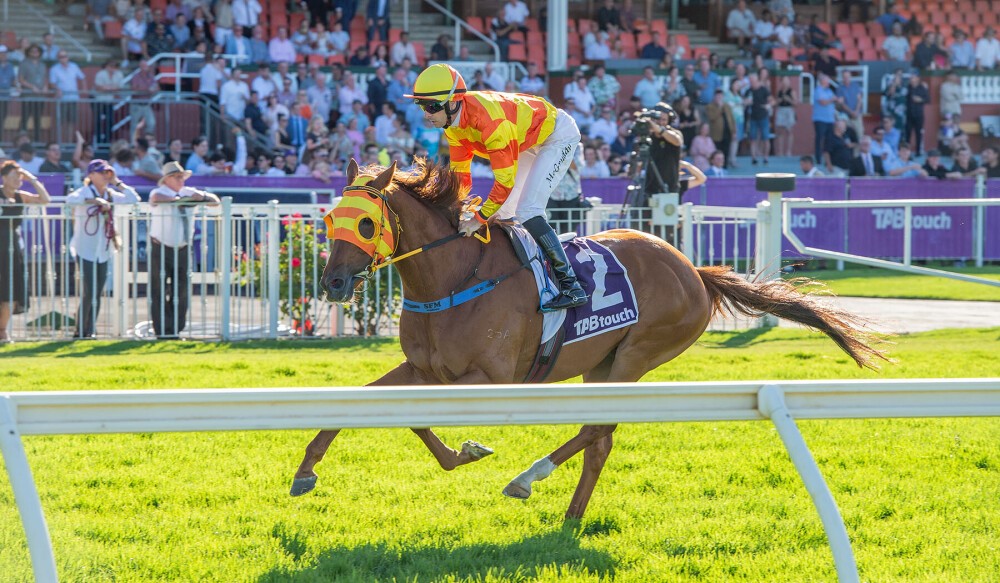 Part-owner and trainer David Harrison is contemplating a campaign for the 2023 Melbourne Cup (3200m).  “You’ve got to dream so we might send him to a trainer over there and have a crack,” he said.  “The further he’s gone, the better he’s liked it.”

Buster Bash (Photo / Western Racepix) scored one of the more dominant victories of the modern era in the Perth Cup after Shaun McGruddy sooled him to the lead approaching the home turn.

The chesnut son of former Alwyn Park sire Trade Fair (Zafonic) kept up a strong gallop in the straight to score by more than four lengths!

“Running the race right out is probably the main thing that’s surprised me,” Harrison added.  “But you can never underestimate him if he gets away in front.”

In contrast, Andrew and Perth bloodstock agent John Chalmers never doubted his ability to get the distance.  “John told me he’s inbred to The Minstrel (Can) and Secretariat (USA) who were both Group 1 classic winners over 2400m,” Andrew said.  “Disco Miss also has a close classic relation.  Her dam Dance Play (GB) is a three-quarter-sister to G1 English Derby winner Secreto (Northern Dancer).”

There’s also staying blood through Trade Fair (GB).  His dam Danefair (GB) won Listed races up to 2400m in France and his second-dam Roupala (USA) is by Vaguely Noble (Ire) who won an Arc de Triomphe (2400m) out of Cairn Rouge (Ire) who won an Ascot Champion Stakes (2000m).