Darling View Thoroughbreds is about to embark on what’s shaping up as another good-news week at the Gold Coast Magic Millions Yearling Sale.

The Mundijong stud has entered two beautifully-bred fillies through Attunga Stud (as agent) for the sales-season opener that kicks off on Tuesday at 10am (WST).  The Written Tycoon (Lot 821) and Dundeel (Lot 830) youngsters will go under the hammer this Friday. 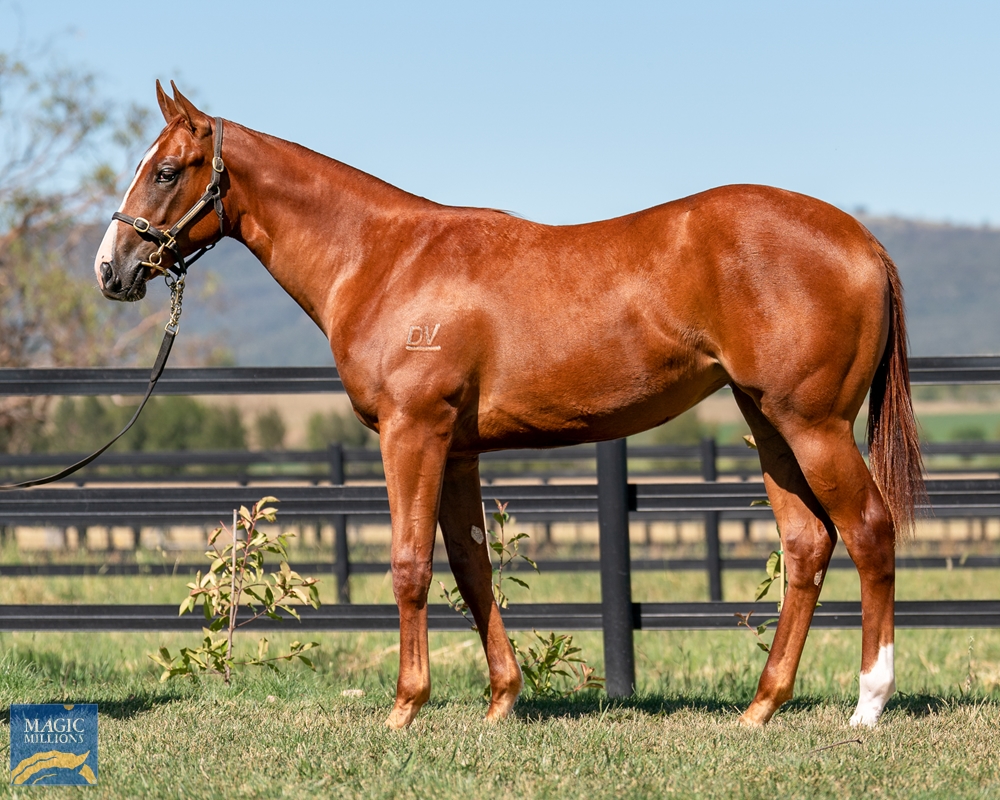 Written Tycoon sired his filly (pictured) from Rosehill winner Elouera (Street Cry) who was a $310,000 buy for Darling View at the 2021 Magic Millions National Broodmare Sale.  She was carrying a PPT to the Champion Australian sire on the Gold Coast.

Elouera foaled a Bivouac colt in October and Darling View bred her back to So You Think (NZ).  Her dam Russeting (Commands) was a Group 1 winner of the 2009 Qld Tatt’s Winter Stakes (1400m) at Eagle Farm for Bart Cummings.

Darling View general manager Brent Atwell introduced the first local stallion for 2023 last week when announcing the purchase of Lightsaber.  A Group 2 winner in Melbourne at two and three, he’s the first son of Zoustar to stand in WA.

On Saturday, Darling View graduate Titanium Power (So You Think) scored an all-the-way victory in the Fujitsu General Hcp (1200m) at Rosehill.  He was purchased by Warwick Farm trainer Joe Pride for $50,000 through Attunga Stud (as agent) at the 2019 Inglis Classic Yearling Sale and is now on the cusp of $500,000 in earnings.

The first Darling View-conceived yearlings by I’m All The Talk will be offered at the 2023 Perth Magic Millions and his winner-count kept ticking over when Premium Choice landed a last-to-first victory in the Glenroy Chaff Hcp (1000m) at Ascot on Saturday.

Premium Choice is trained by Tony Triscari for owner-breeder Les Andrews who has his yearling full-brother by I’m All The Talk.  Their dam Royal Anna (Royal Academy) descends from Royal Ascot King’s Stand Stakes winner Don’t Worry Me (Dancing Dissident).

I’m All The Talk’s former Perth mare Watch Me Dance is due to resume racing for new trainer Lloyd Kennewell after a Cranbourne trial this Wednesday.  She was purchased by Sean Buckley for $600,000 at the 2022 Magic Millions National Broodmare Sale.

Buckley bought Miss Andretti (Ihtiram) out of Perth in 2006 and she went on to claim Australian Horse of the Year honours following a Royal Ascot King’s Stand Stakes victory in 2007.

“We’ve pretty much got one roll of the dice with her before she goes to stud,” Kennewell said.  “She’s coming along nicely and I’ve been happy with her progress.  We will kick off in a Benchmark 84 here in Melbourne and then perhaps head to Tasmania.

“In fairness, she’s already a Group 2 winner in Perth so we are just going to see if we can reinvigorate her a little bit and get a return for Sean.”