Winner of the Week – More Special 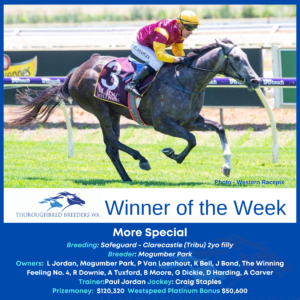 The Paul Jordan-trained Safeguard 2yo More Special was a moral to win a juvenile race this season and the speedy grey filly duly obliged in the Magic Millions Plate (1000m) at Ascot on Saturday.

More Special was placed in her first two outings but wasn’t to be denied third time out with a dominant front-running victory over Safeguard colt Safe Hustle.

Mogumber Park stands Safeguard (Exceed And Excel) who was WA Champion 2yo Sire and First-Season Sire in 2018-19.  He’s also the one to run down in this season’s WA 2yo premiership race with earnings of $243,422.

The Bullsbrook stud’s proprietors Colin Brown & Fiona Lacey also own More Special’s dam Clarecastle who won four races in Perth as well as stakes-placings in a Perth Magic Millions 2yo Classic, G3 Champion Fillies Stakes and G3 Sir Ernest Lee-Steere Classic.  Saturday’s victory improved the Tribu mare’s strike-rate to 8 winners from 8 live foals.  Three of them are by Safeguard including Specialism who was instrumental in his first-crop titles.

“I’ve trained all of Clarecastle’s foals,” Jordan said.  “She’s a superstar broodmare and is white as snow now.

“More Special walked them in front today and was too good.  She’s a relaxed filly and a good doer at home.  The owners are a very happy group, too.  They’ve just banked $87,000 with Westspeed Platinum bonuses in a five-horse field.  Where else can you get those odds?”

Jordan’s wife Laura manages the syndicate that includes Mogumber Park who have a full-brother to More Special on the ground at Bullsbrook.  Jordan reported Clarecastle is back in foal to Safeguard.

Jockey Craig Staples has also been an ever-present with the breed having ridden all of Clarecastle’s winners.  “More Special is much calmer than the others,” he said.  “She was green on debut and ran into a classy one (Shaddow Fear) last week.

“We got some cheap sectionals today before extending.  She kept finding and is starting to put it all together.”