The Peter Moody-trained colt won the G2 VRC Sires’ Produce Stakes (1400m) at Flemington and G2 Caulfield Guineas Prelude (1400m) for Blueblood Thoroughbreds who bought him for $100,000 at the 2020 Inglis Ready2Race Sale. 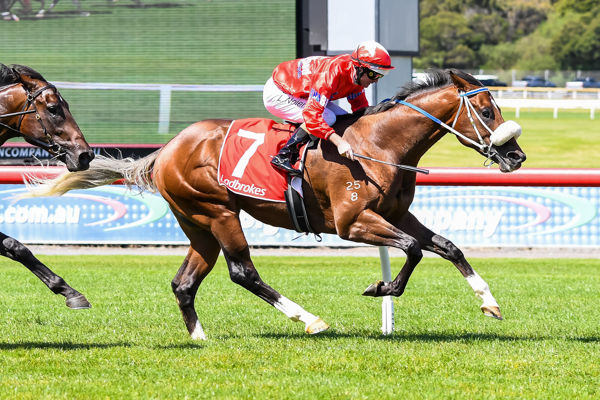 Lightsaber (4h Zoustar – Dream Cirque by Dream Ahead) will stand alongside Playing God, Splintex and Patronize in a deal brokered by Premium Bloodstock’s Grant Burns on behalf of the Atwell family who own and operate the Mundijong stud.

In a 19-start career, Lightsaber (pictured) was also runner-up in the G1 Australian Guineas (1600m) and he bowed out after unplaced runs in the $10million Golden Eagle (1500m) at Rosehill and LR Cranbourne Cup (1600m) this season.

Darling View’s Brent Atwell told ANZ News he had been considering multiple stallion options available on the open market to follow on from the momentum generated by Splintex (Snitzel) who covered 118 mares first-up in 2022.

“We’ve got plenty of Danehill-line horses in WA, so I was looking for that out-cross and Zoustar’s obviously a champion in his own right and doing big things in the northern hemisphere as well.

“We were trying to find the next stallion by Zoustar.  I thought the first foals by Zousain were outstanding at all the weanling sales I attended last year so if Lightsaber can throw a type like Zousain, we’re on our way.”

Moody said Lightsaber would have raced on in top company but for being snapped up by Darling View Thoroughbreds.  “He was a Group 2 winner at two and was dreadfully unlucky not to have won the Australian Guineas at three due to having a very awkward preparation.  I think he would be a nice horse wherever he went to stud.”

Zoustar (Northern Meteor) has sired 33 Stakes winners with five rising to Group 1 victories in Australia and England.  The best of his Perth progeny to date has been the Neville Parnham-trained Listed winner Indian Pacific (R S Crawford Stakes & Summer Scorcher).

Lightsaber was bred by Emirates Park in NSW and his dam Dream Cirque hails from the family of Champion Australian stallion Fastnet Rock.  A service fee for the Darling View newcomer will be announced at a later date.