Winner of the Week – Lucky’s Way 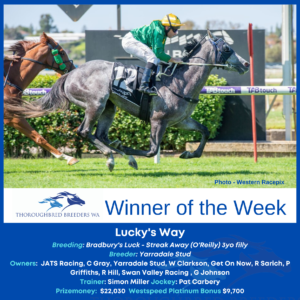 Yarradale Stud farewelled Bradbury’s Luck last year but he’s still a factor with horses like Burnya To Survive and Gunmetal Gray more than paying their way in Perth.

Bradbury’s Luck 3yo Lucky’s Way also paid back $22,000 of a $75,000 price-tag at the first time of asking in the Salinger Maiden (1300m) at Belmont on Thursday.  The grey filly had been a work in progress trialling five times before trainer Simon Miller decided to push the button.

“She was raw and not ready mentally so we had to be patient,” Miller said.  “She was close to racing earlier this season but I decided to tip her out again because she was still a bit fragile.

“She loves a kiss and cuddle and I knew she had an engine so we went ahead after she worked sweetly on the grass last week.  I was happy enough when she sat one off the speed today.  She rolled around so there’s obviously improvement to come with more racing.”

Lucky’s Way won by a length and a length from Let Them All Talk (I’m All The Talk) and the favourite Eee Pee Cee (So You Think).   She was bred and sold by Yarradale at the 2021 Perth Magic Millions and is from one of the Gidgegannup stud’s favourite families.

She’s the first foal of NZ-bred mare Streak Away (O’Reilly) who won a Bunbury maiden but retired three starts later when vets diagnosed Cardiac Arrhythmia at Pinjarra.  The mare has unraced 2yo Dashing Erika (Smart Missile) with Adam Durrant and she followed up with early-season colts by Patronize and Playing God.

“She did a good job,” jockey Pat Carbery reported.  “We got cover and I decided to follow Willie (Pike).  I waited until his horse came under pressure and then she angled out and hit the line full of running.”