Seeable is on a hat-trick of his own having scored a similar front-running victory first-up in a Westspeed Platinum Hcp (1400m) on Xmas Eve.  He shouldered 60kg that day and handled a penalty to 61.kg on Saturday.

“He’s strong and can carry weight,” trainer William Lewthwaite said.  “He’s not known as a second-up horse so I gave him an extra week between runs.  A soon as he jumped so well, I knew that it was a good move.  Having a great jockey on board like Brad (Rawiller) also helps.

“He’s a stallion and had his traits but he’s a gentle horse now with a lovely demeanour.”

War Chant (Danzig) commenced his stud career at Three Chimneys Farm in Kentucky before transferring to Yarradale where his stats stand at 11 Australian Stakes winners among 149 individual winners.

He can make it an even dozen in black-type caps this year with the likes of Express Time and Strathmore Rose who finished second and fourth respectively in the LR Miss Andretti Stakes. 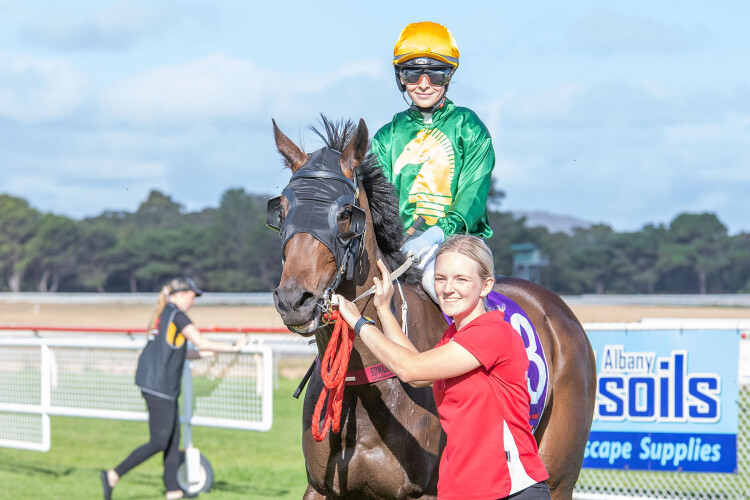 “Beaux (Banovic-Edwards) was a bit apprehensive before the Fitzpatrick Plate from the wide gate,” Rogers told TAB Radio.  “I told her to go forward because that was her only chance of winning.  She’s really good at riding front-runners and she did the job.

“The give in the ground helped her hang on late.  They poured a lot of water on the track otherwise she might not have got there.  She can keep progressing in town as long as the ground isn’t too hard.”

Strathmore Rose (5m War Chant – Queen’s Gem by Hussonet) cost $52,500 out of the Yarradale draft to the 2019 Perth Magic Millions.  She’s a full-sister to Bunbury 3yo Classic winner I Am Boudica and their half-sister Gemalileo (Teofilo) has a Shooting to Win colt (Lot 265) from Scenic Lodge at the Perth Magic Millions.