Shooting for another Million in NZ

Shooting To Win sired Centrefire to win the inaugural Magic Millions The Syndicate (1200m) at the Gold Coast on Thursday and he can claim another seven-figure, sales-related race in New Zealand this weekend.

The former Darley stallion has climbed into the Top 40 on the Australian sires’ table since Neville Duncan purchased him to stand at Oakland Park last year.  He can also go to another level in NZ if his 2yo colt Dapper wins the RL Karaka Millions (1200m) at Pukekohe on Saturday. 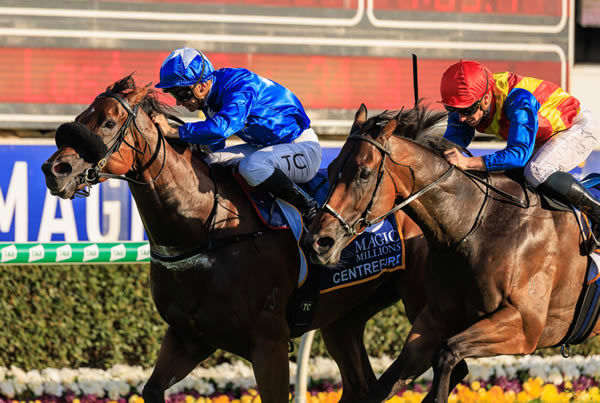 His mare Centrefire (pictured) was a $100,000 buy for trainer Chris Munce at the 2018 Magic Millions Yearling Sale.

She was eligible for the $1 million weight-for-age event which is open to horses owned by a minimum of 20 individual registered owners and/or syndicate members.

“It’s a great concept and is becoming the way of the future,” Munce said.  “So many owners can’t afford going one-out or two-out and these syndicates provide the opportunity for people to come racing and have a lot of fun winning million-dollar races like today.

“She’s already a Stakes winner and is a very valuable broodmare as well.”

Across the Tasman, Dapper firmed from $21 into $14 for the Karaka Millions following a last-start victory in the Norwegian Park Stakes (1200m) at Pukekohe.

Dapper (2c Shooting To Win – Brianna by Sudurka) sat just off the speed under jockey Ryan Elliot and relished the long straight for a second success in five outings for trainers Johno Benner and Hollie Wynyard.

A big, gross colt, he had won an Otaki nursery in September before a Group 2 placing in the Wakefield Challenge Stakes (1100m) at Trentham last month. “He’s very laid-back and is always carrying too much condition,” Wynyard said.  “We decided to run him again two weeks before the Karaka Millions to tighten him up.  He’s a pretty good colt and has taken improvement out of that win.”

Dapper was bought by Gary Harding for $150,000 from Milan Park at the 2022 NZB National Yearling Sale.  His dam Brianna was Group 1-placed in the 2008 Railway Stakes (1200m) won by Imananabaa at Ellerslie.

Benner and Wynyard are no strangers to Karaka Million success having prepared Vespa to take out the million-dollar feature in 2014,

Shooting To Win has three yearlings entered for the Perth Magic Millions starting with the Nuimara Farm colt (Lot 65) from Caipirinha (Nicconi) who was a Listed winner of the Placid Ark Stakes, Belgravia Stakes and Miss Andretti Stakes.

Scenic Lodge has a half-brother to G2 WA Derby winner Mystic Prince (Lot 167) and a colt from a half-sister to Fitzpatrick Plate winner Strathmore Rose (Lot 265).