WA sires have been represented by winners at all bar one of the Hong Kong meetings held since New Year’s Day.

They were augmented by the Dawson Stud-bred Sight Success (Magnus) in the G3 Bauhinia Sprint Trophy (1000m) on January 8. 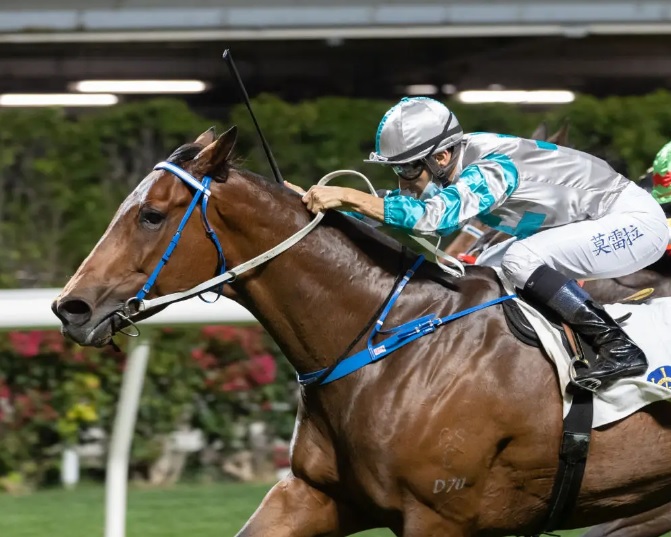 A daring mid-race move gave Daily Beauty (pictured) the upper-hand for jockey Vincent Ho on Wednesday and he stubbornly prevailed from GB-bred Smiling Face (Acclamation).  It was the first-leg of a double for trainer Caspar Fownes who is now within five wins of premiership leader Frankie Lor (29 wins).

“I’m on the pace and it’s going well,” said Fownes whose most recent title was in 2020-21.  “I always believed Daily Beauty was a miler but he disappointed when I put him over the distance.  I thought maybe I had got him wrong but then he ran really well the second time at 1600m.”

All American sired Daily Beauty from Mixed Emotions (Testa Rossa) who is closely-related to Group 1 racehorse and sire Northern Meteor.

Packing Treadmill, a son of fellow Geisel Park sire Manhattan Rain, is primed for his biggest test in the HKJC Classic Mile at Sha Tin on Sunday week, January 29.

He’s among 22 entries and South China Morning Post predicts he will start favourite for the first leg of the prestigious Classic Series.

Packing Treadmill is trained by Francis Lui and he coasted over the line in third spot at the Sha Tin trials on Tuesday in a final hit-out for Zac Purton.  “He has never been the flashiest horse trialling on dirt but that’s probably as good as he’s gone on the surface,” Purton said. “He does everything he needs to do.

“He’s very kind in the mornings and at the races.  He begins very well, he puts himself in the right spot, he relaxes, he does everything you want a horse to do, and then he just waits for his signal.”

Hoofnote:  Lucky Street newcomer Magniac is the sole WA-sired representative at Sha Tin this Saturday in the Peony Hcp (1200m).  Bred by Darling View Thoroughbreds, he raced as Final Series in Perth and was sold off-shore to clients of first-season trainer Jamie Richards after completing a hat-trick at Belmont in June 2022.